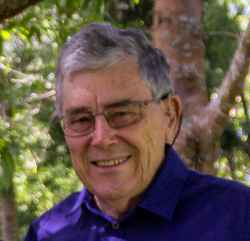 Named Robert George Corder by my parents, I am generally known as Rob. I am an ordained Presbyterian Minister. Although officially retired, in practice I remain active and when COVID is not around, I preach several times a month in various churches as needed.

During 36 years of full-time pastoral ministry, I pastored the following Presbyterian congregations:

Although I retired from the full-time ministry in 2006 I have continued to preach in churches around our city as well as in the nearby seaside town of Jeffrey’s Bay (about an hour away). However, with the Covid-19 pandemic, these preaching engagements came to an abrupt halt so I busied myself with this series of reflections on the prophecy of Habakkuk. I found them to be most appropriate, especially in view of the major problems as a result of the horrific Coronavirus.

With the lockdown regulations being eased off I have once again become active in preaching at two Presbyterian congregations in the city. After well over a year that series on the prophecy of Habakkuk has come to an end. At present am busy on a new series titled ‘Encounter with Jesus’. reflecting on a number of bible personalities who had an encounter with Jesus during His earthly ministry.

Until the end of 2019, both Shirley and I were involved in the Happy Echoes Choir, a group of approximately 30 retired persons, which was really like a large musical family. We produced around 25 concerts a year at local retirement villages, social clubs and church senior’s groups. We had to go into recess suddenly as a result of lockdown, but remain in touch through a Whatsapp group.

When not preparing sermons or devotions I enjoy building model ships, oil painting, jigsaw puzzles, and the challenge of Sudoku.

My wife, Shirley, is a published author, and you can see more about her on her website, Write to Inspire, of which this one is a subdomain.