Recently we looked at the tragedy unfolding between Ukraine and Russia. But there are also frequent tragedies that occur as a result of natural disasters. As I write this, the residents in South Africa’s Kwazulu-Natal province are facing devastating loss of life, possessions, and homes due to heavy downpours and widespread flooding and landslides.

I recall an Afrikaans setwork book we had at school, entitled ‘Droogte’ (drought) by C .M. van den Heever. The book describes a period of time in the Karoo area of our country when there was a severe lack of rain. It goes into how the farmers would anxiously examine the sky day after day looking for any sign of a build up of clouds with the promise of rain. 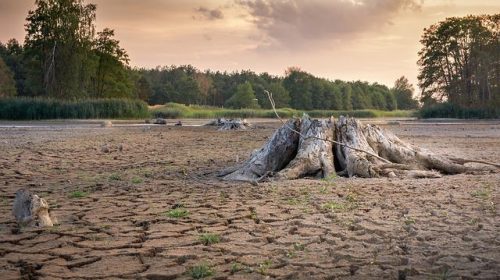 Image by Sven Lachmann from Pixabay

Our text verse for this week’s study conveys the same desperate picture.

‘Though the fig tree does not bud and there are no grapes on the vines, though the olive crop fails and the fields produce no food, though there are no sheep in the pen and no cattle in the stalls yet I will rejoice in the Lord.’

As Habakkuk draws his prophecy to a close, he imagines the worst scenario. He does this by focusing on a number of familiar metaphors drawn from the plant and animal life in Israel.

“Though the fig tree does not bud (blossom)”. The interesting fact is that the fig tree never blossoms as we know it. You will never see a flower on the fig tree. The fig is actually an inverted flower! Yet it is an important fruit in Israel.

The fig tree was common in the land of Canaan. Its fruit was used in many ways, so if it did not produce fruit, it was bad news.

Cakes were made from figs:

“Abigail flew into action. She took two hundred loaves of bread, two skins of wine, five sheep dressed out and ready for cooking, a bushel of roasted grain, a hundred raisin cakes, and two hundred fig cakes, and she had it all loaded on some donkeys.” (1 Sam. 25:18)

So it was really bad when there was a scarcity of figs.

Grapes were pressed to make wine, which was used in sacrifices to God as well as for personal use. For there to be no grapes on the vine would lead to an economic crisis in the land.

The olive tree yielded berries out of which oil was extracted. The Jews use olive oil instead of butter, they use it to light lamps, for their cooking, for making soap, for medical purposes and as cosmetics. A barren olive tree would be a disaster for its owner.

The grass fields provided fodder for the animals. The grain fields provide food for the people.  The fields produce crops of wheat, sorghum and corn. The people and economy depend upon this.

Flocks of sheep could be depleted by the hand of God, through disease, driven off by enemies, or simply killed to provide food. Likewise, oxen would no longer be in the stables for the same reasons.”

These were important necessities of life in Judah. What if the fig, grape or olive crops were to fail?  If the fields became bare of grass or grain, what would it mean to the nation? If the stocks of sheep and oxen were depleted, the result would be hardship and hunger. These possible disasters were obviously a cause of great concern.

Devastating loss may occur through circumstances apart from natural disasters such as flooding and drought.

Last week the supervisor of the retirement village where Shirley and I reside sent this message to our cellular phones:-

Gqeberha 22 April 2022 Police in Gqeberha are warning shoppers/motorists especially the elderly to be vigilant and take note of their surroundings when returning to their vehicles after shopping.

This alert arises from several reports received of people being robbed of their belongings by criminals. the modus operandi is that either the owner/driver reaches his/her vehicle or is already seated in the vehicle when a well-mannered man appears and informs him/her that their vehicle has an oil leak, or that water is leaking from underneath the vehicle or that the car has a flat tyre. As soon as the victim gets out of the vehicle, another person will appear without being noticed, open the door and grab a handbag, cellphone and other belongings in the vehicle. Alternatively, if the victim is still outside the vehicle, the suspect will advise that he/she places their belongings on the ground so that they can bend to see the ‘oil’ or ‘water’ leak. The personal belongings and parcels are then snapped away by the second suspect. Both suspects the disappear.

Shoppers are urged not to entertain anyone who approaches them with these allegations or any other disturbing information about their vehicles instead walk away from their vehicles and report them to the centre’s security or attract the attention of other shoppers.

I believe that some folk have experienced devastating loss due to these con artists.

It is a sad fact but unfortunately true that crime in all its varied forms is on the increase and we need to be vigilant in order to avoid devastating loss. South Africa has more than its share of crime, but you only need to watch the world news to see we are not alone in this sad state of affairs.

Technology is a wonderful thing yet these con artists are using technology to deprive us of our hard-earned finances. I am constantly being warned by my bank of scams that are afoot to encourage me to surrender my meagre income to some cyber thief. Beware!

When we do suffer a devastating loss through natural disasters or even by having yielded to some clever scam, it is difficult for us to accept. We may even be inclined to blame God and ask ‘Why?’

SO WHAT SHOULD WE DO?

But what does Habakkuk suggest? Even if these disasters were to occur, he urged the nation of Israel to “rejoice in the Lord.” He says “I will be joyful in God my Savior.”

Pastor Ray Fowler has this word of advice:

‘It is right and proper to voice appreciation of God’s goodness when he bestows all that is necessary for life, health, and prosperity. But when these things are lacking, to rejoice in God for his own sake is evidence of pure faith.’

I have learned over the years that even when we have experienced severe losses, the Lord has been gracious and never deserted us. He continually recompenses us in some way for the loss we experienced. So yes, I need to take heed of Habakkuk’s words. I need to rejoice in the Lord, and be joyful in Him.

Reflect on the ways that the Lord has blessed you, even in times of distress and disaster. Rejoice in God who is aware of your every hardship and is available to carry you through the worst senario.

I strongly suggest you sit back and follow this video clip based on the words we have looked at today. It takes just over two minutes, and it is a different rendition to the one you may know, but it drives home God’s magnificence in the time of tragedy, loss, and confusion that we all, as a world, have been through in recent years. Click on the link below.