‘He stood and measured the earth; he looked and shook the nations; then the eternal mountains were scattered; the everlasting hills sank low. His were the everlasting ways.’

Mountains have been split or shaken by an earthquake or a volcano, but ‘scattered’?

Habakkuk says ‘the eternal mountains were scattered.’ What on earth did he mean? 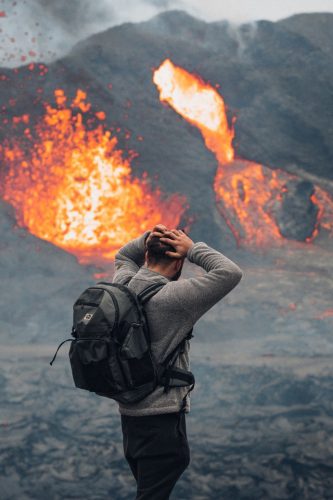 The prophet imagines God on the move. As He advances, Habakkuk pictures God stopping suddenly to measure the earth.

The explanation becomes a lot clearer as we examine some of the other translations.

Several translations do not use the word ‘measured’:

God’s judgement is so fearsome that it even affects nature.

“Mountains were scattered” (ASV; ESV; KJV) Other versions have:

What God Says About Measuring

God does have a lot to say about measuring in the Bible.

He provides his children with very definite instructions with regards to the use of weights and measures.

“Use honest scales and don’t cheat when you weigh or measure anything.” (Leviticus 19:35 CEV)

“If you weigh and measure things honestly, the LORD your God will let you enjoy a long life in the land he is giving you.”(Deuteronomy 25:15 CEV)

The mountains are eternal and everlasting in the sense that they have not moved. They have remained in the same place from the very foundation of the world.

The apostle John in his revelation of the last days says, “When I saw the Lamb open the sixth seal, I looked and saw a great earthquake.…..Then the sky was rolled up like a scroll, and all mountains and islands were moved from their places.” (Revelation 6:12,14 CEV)

Habakkuk 3:6 in a sense is a foreshadowing of the last days. He tells us, these mountains and hills that were from the beginning of the creation have never moved. Yet, one day they will tremble or shake under the judgemental power of God.

Similarly, Judges 5:5 says, “Mountains tremble at the presence of the LORD.”

Scripture records that even Mt Sinai shook—at the presence of the LORD God of Israel.” (Exodus 19:18 ISV)

A keyword from our text is also in a popular Christmas verse:

“For to us a child is born, to us a son is given, and the government will be on his shoulders. And he will be called Wonderful Counselor, Mighty God, Everlasting Father, Prince of Peace.” (Isaiah 9:60)

For example, God’s ways are everlasting in that He is constantly saving His people. What he has done in history he can do again and again. His power, his provision, his wisdom, and his grace, never change. Yesterday, today and forever God is still the same.

“Your kingdom is an everlasting kingdom, and your dominion endures through all generations.” (Psalm 145:13a NIV)

All He does in time, every action he takes, is according to his plans, purposes, and decrees, and they will come to pass. Everything is subject to his control. Nothing can happen without his permission.

Earlier on we looked at the use of the word ‘measured’.

With this in mind, read the following:

Christ’s love is so beyond measure, that He was prepared to sacrifice His life for us.

Mohammed and Buddha were each born on a particular day, and their lives ended on specific dates.

The Greek and Roman gods were a figment of man’s imagination so they never lived at all.

By contrast, Christ existed eternally. He was born on earth and lived as a human being for over thirty years. He was crucified and died. But on the third day, after His death, he rose again. After forty days He ascended back into heaven to continue His eternal existence.

In my youth group days (and that was a very long time ago!) a popular song we used to sing was ‘Yesterday, today, forever Jesus is the same.” based on Hebrews 13:8. Do you know this song? It reminds us that Jesus is always the same.

Isn’t it great to know that the God we serve is timeless? As we have noted the gods worshipped by some of the other religions and sects were men who were given the status as gods, but because they were mere mortals they had a limited lifetime.

Our God is alive forevermore.

Indeed why not take Nehemiah’s words to heart and spend some time in praise of our everlasting God. Perhaps you would like to sing along with that song Yesterday, today forever God is still the same.