Picture a glorious sunrise.
The sun’s light gradually falls on the scene around you.
The darkness slowly slides away.

Oscar Hammerstein ll and Sigmund Romberg captured the glory of a sunrise in their song “Softly as in a morning sunrise’ which they composed for the operetta ‘The New Moon’ in 1928. In fact, the song actually refers to the budding and blossoming of love. Yet, it nevertheless conveys the gradual radiance created by an early morning sunrise.

An amazing sunrise I experienced many years ago comes to mind. At the docks in Cape Town before dawn one morning I awaited the arrival of one of the Union-Castle liners. In those far-off days, Union-Castle liners travelled regularly once a week from Southhampton U.K. to South Africa.

As I sat on the dockside the sun began to rise across the sea horizon. As I turned to look back at the beautiful Table Mountain, I watched in wonder as the sun’s rays slowly illuminated the face of the mountain, little by little, moving from top to bottom. It was an awesome sight.

Habakkuk seems to have had this kind of picture in mind as he tries to describe the glory of God.

‘Your glory was like the sunrise. Rays of light flashed from your mighty hand. Your power was hidden there.’ 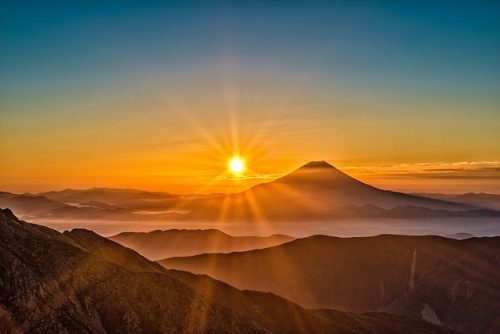 The English Standard Version puts it this way:

“His brightness was like the light; rays flashed from his hand; and there he veiled his power.”

The suggestion is that most of His power remains veiled, or concealed.

Consequently, several commentators have likened this to God’s glorious appearance on Mount Sinai.

Some compare it to the pillar of fire which guided the Israelites through the desert.

“By day the LORD went ahead of them in a pillar of cloud to guide them on their way and by night in a pillar of fire to give them light, so that they could travel by day or night.”  (Exodus 13:21 NIV)

Light has a particular significance in scripture.

The CEV says in Hebrews 1:3 that

God’s Son has all the brightness of God’s own glory.

Light is also associated with the preaching of the Gospel.

“The people living in darkness have seen a great light; on those living in the land of the shadow of death a light has dawned.” (Matthew 4:16)

This comes in fulfilment of Isaiah’s prophecy,

“The people walking in darkness have seen a great light; on those living in the land of deep darkness a light has dawned.’ Isaiah 9:2)

Consequently, the Gospel has brought and continues to bring brightness and light to a dark world enmeshed in evil. Those early disciples who witnessed Christ’s glory could, with all authority, proclaim Jesus to be the light of the world.

Since His return to heaven, Christ is bathed in light, crowned with glory and honour, and highly exalted at his Father’s right hand, above all principalities and powers.

“Jesus Christ, who has gone to heaven and is at the right side of God, ruling over all angels and heavenly authorities and powers.” (1 Peter 3:22 GNB)

God is not only seen as a Light, He is the Light. The Light of God is like a garment in which God is clothed.

“Now the message that we have heard from his Son and announce is this: God is light, and there is no darkness at all in him.” (1 John 1:5 GNB)

Many who have had an after-death experience, have testified that in the spirit they were drawn towards a bright light before returning to their earthly bodies.

In the beginning, when God created the universe, the earth was formless and desolate.   The raging ocean that covered everything was engulfed in total darkness, and the Spirit of God was moving over the water. Then God commanded, “Let there be light”—and light appeared. (Genesis 1:1-3 GNB)

The power of God is revealed in that light. The very name God in the New Testament translates the Hebrew word ‘El’ (singular) and ‘Elohim’ (plural), with a root meaning ‘to be strong.’ (Illustrated Bible Dictionary by M G Easton). When ‘El’ is used to indicate deity it is often linked with ‘almighty’. For example, the title El-Shaddai means God Almighty or all-sufficient. (The New Bible Dictionary)

So here we are talking about a powerful God.

Now, this is where it gets really interesting. In Genesis 1:1,3 we read,  “In the beginning, God created the heavens and the earth………And God said, ‘Let there be light,….'” The Hebrew word for God in both of these verses is ‘Elohim’ which is masculine plural. (Strongs Lexicon)

So from the very creation of the world, we see all three members of the Trinity involved. Again in Genesis 1:26a we read “Then God said, “Let us make mankind in our image, in our likeness...”  There can be no doubt of the involvement of our Trinitarian God (in other words, three-in-one God) from the very beginning.

Isn’t it simply amazing that the Almighty Creator of our planet and the universe in which it exists, is the same God who sent Christ, one of the Trinity, into our world to rescue us from the power of sin? And then to cap it all, the Holy Spirit, the third member of the Godhead, takes up residence in the lives of those committed to Christ as Saviour and Lord.

What a mighty God we serve!

Why not spend a few minutes now in communication with Elohim just thanking Him for His amazing love and provision for your every need.

If you would like to listen to the song Softly as in the morning sunrise here it is sung by the old crooner Bing Crosby.

PS. If you haven’t yet read the background to the prophecy, please do. It will benefit you throughout this series of studies.