Several years back, I came across the word ‘déjà vu’ as the title of a daily devotion. There was also a movie on TV with the same title. I have to admit. I had no idea what the term meant.

Upon research, I found that déjà vu is a French word meaning, ‘a feeling of having experienced something that is actually happening now’. (Collins Paperback English Dictionary)

Do you remember Simon Peter’s hurtful words? He denied the Lord, not just once but three times!

Jesus was crucified soon after, so there was no way Peter could apologize. It was too late. Or was it?

Read this story in your Bible, or click on the link above.

Our passage today is all about déjà vu. The reading records the 3rd reported resurrection appearance of Jesus to His disciples—actually his 4th to Peter. (Luke 24:34)

By this time Peter no longer doubted the reality of Jesus’ resurrection. This fact must have encouraged Peter, yet,  deep within, guilt and shame were eating him up. How could Jesus ever trust him again?

Most of Jesus’s resurrection appearances were around Jerusalem, and Jesus returned to heaven from just outside of Jerusalem. But the women returning from the tomb were told by Jesus,” “Go and tell my brothers to go to Galilee; there they will see me.” (Matthew 28:10)

Those inner feelings of guilt that the disciples had experienced over Jesus’s arrest and crucifixion had to be dealt with. In particular, Peter needed inner healing from that dreadful denial of his Lord.

The disciples went to Galilee but Jesus delayed his appearance. When Jesus didn’t turn up, Peter behaved like many of us do. He couldn’t handle the inactivity, so he decided to go back to the familiar. “I’m going out to fish,” (John 21:3) he announced and six others joined him.

Their venture was a waste of their time. They fished all night, but never even caught a single minnow. That’s when Jesus showed up. 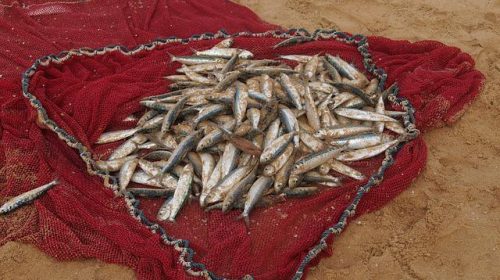 Image by jürgen Scheffler from Pixabay

As they came closer to the shore, they spotted a man on the beach who called out, “Friends haven’t you any fish? Throw your net on the right side of the boat and you will find some.” (Verses 5,6)

These were experienced fishermen who had been fishing all night! Then this guy comes along and tries to teach them their job! Who is he anyway? Yet, he spoke with an air of authority, so those tired fishermen did as he suggested. And what amazing results! “They were unable to haul the net in because of the large number of fish.” (Ibid. Verse 6)

This experience is so similar to a previous occasion when the disciples obeyed a similar command, that it must have created a sense of déjà vu. On that previous occasion “…they caught such a large number of fish that their nets began to break” (Luke 5:6).

Was Jesus rubbing salt into the wounds of Peter’s failure by re-enacting that previous miracle? Or was there more to it?

TIME FOR A SWIM

The Apostle John registered who the man on the beach was. He told Peter “It is the Lord!” (Ibid. Verse 7)

On that occasion when Peter realized it was Jesus, he clambered out of the boat and began to walk on the water toward Jesus. But when he took his eyes off Jesus he began to sink.

Once again, Peter gets out of the boat to go to Jesus. But notice this time he doesn’t try walking on water! Perhaps he’d learned his lesson. He “jumped into the water” (Ibid. Verse 7) and probably swam ashore. I wonder if Peter, as he swam, recalled that previous occasion?

That so often happens, doesn’t it? We launch out in faith. It backfires—we mess up. Next time that situation re-occurs we make no attempt to exercise faith. We don’t want to blow it again. Yet, that very situation may be a God-given opportunity to help us get over our previous failure. 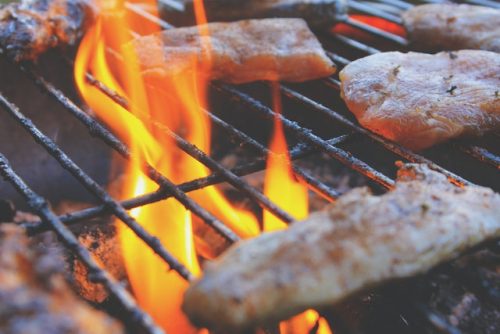 When the disciples gather on the shore they find “a fire of burning coals…” Several versions speak of “a charcoal fire”. (John 21:9 CEV,GNB,ISV)

There is only one other occasion in the N.T. that mentions a “fire of burning coals” or “charcoal fire”. (John 18:18) At the High Priest’s house, after Jesus’ arrest. Peter’s 2nd and 3rd denials of Jesus took place as he was warming himself in front of a charcoal fire. He was standing at that same charcoal fire when the cock crowed.

Seeing the fire alongside the sea of Galilee must surely have evoked a sense of déjà vu in Peter. I’m sure Peter had a snapshot in his mind of that previous charcoal fire, and how he had cursed and sworn, “I don’t know the man!” (Matthew 26:72,74)

There’s that charcoal fire “with fish on it and some bread. “(John 21:9) Where did the fish come from? Not from the boat, they had only just landed. On at least two previous occasions, Jesus provided a crowd with a meal produced from a small quantity of fish and bread. Once again Jesus provides His disciples with a simple meal of fish and bread.

Why did Jesus reconstruct this sequence of events? —The miraculous catch of fish; The swim to the beach; The charcoal fire; And the meal of fish and bread. All déjà vu events geared to bring Peter’s worst memory to the surface. So that Jesus could help Peter deal with this lingering memory.

But it does not really help to be reminded of the hurt—the damage that’s been done. There needs to be a healing.

Maybe there’s an incident in your life when you let the Lord down. It has caused you deep hurt.  Even now, you remember it. So how does that help? It must be dealt with to bring healing.

Jesus deliberately reconstructed a whole series of déjà vu events in order to bring the memory of Peter’s denials to the surface. After breakfast, Jesus singled Peter out and began His healing therapy.

By this threefold challenge not only was Peter assured of his restoration, he was also re-commissioned by Jesus. In effect, Jesus said, “Love me… go and care for those I love.” And to cap it all Peter heard again those wonderful words, he first heard years before alongside that same Galilean Sea, “Follow me!” (John 21:19)

Peter went on to become a faithful and effective leader in the N. T. church. According to tradition, he was crucified like his Lord, but upside down.

We’ve all failed our Lord. Like Peter we need the assurance that all is forgiven.

Just as Jesus went to amazing lengths to restore Peter as a disciple and re-instate his calling so too our Lord wants us to be assured of forgiveness and restoration. But until those hurtful memories of your failure are dealt with, you can never be the person that God intends you to be.

As we bring this session to a close go into a time of prayer now. Ask the Holy Spirit to pinpoint those areas where you need inner healing so that you may bring those hurts to Jesus.

Perhaps this message has opened up a deep wound, which needs more than just individual prayer to bring about complete healing. If that’s the case, please seek out a strong Christian whom you trust. Make an appointment to spend time with him or her. Share your pain and together seek healing from the Lord. “Again, I tell you the truth, if two of you on earth agree about whatever you ask, my Father in heaven will do it for you”. (Matthew 18:19 New English Translation) God wants to heal those hurtful memories.

Some memories like that of Peter’s denials are hurtful, but the Lord also provides us with pleasant memories which are a source of encouragement. Listen to this song sung by the late Jim Reeves about those precious memories.