In the movie ‘High Society’ Bing Crosby and Louis Armstrong do a duet titled ‘Gone Fishing.’

Peter would have loved to join in and sing along with them.

What does fishing mean to you? Do you enjoy fishing? Or do you feel it is a waste of time? 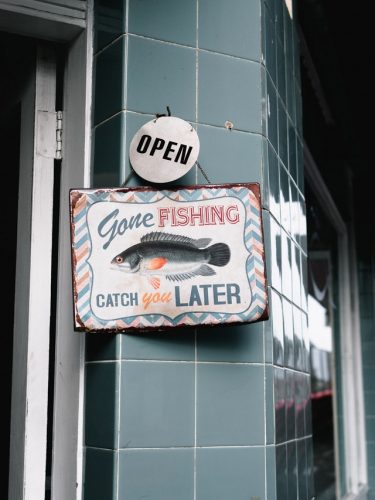 Our Scripture reading records an occasion when Jesus came to the rescue of his frustrated disciples who had spent fruitless hours fishing but had failed to catch even one single minnow.

A lady was invited by her pastor to give her testimony of how she came to invite Jesus into her life. After describing the events leading up to her conversion to Christ, she ended her testimony along these lines, “Jesus said ‘I will make you fishers of men’ and I have been fishing for men ever since.” (Saints at Work – Author Unknown)

Those who love fishing will patiently wait for hours for that tug on the end of their line. I had two uncles who were very keen fishermen. There was an occasion as a youngster when they decided to go fishing for the day and invited me along. Given a rod, with great enthusiasm, I embarked on my first fishing adventure. But the fish were not biting and I wasn’t patient. Before long, I gave up and went exploring the coastline.

Shirl and I were joint leaders of a Holy Land tour in October 1992. We spent three nights at Kibbutz Nof Ginosar on the shore of the Sea of Galilee. There we visited a museum that contained an ancient fishing boat that dated back to the time of Jesus. In 1986, when the surface level of the lake had dropped because of a drought, this boat was found embedded in the mud at the water’s edge.

Early in his ministry, Jesus stood on the shore of Lake Galilee where a large crowd had gathered to hear Him. He asked Peter, whose boat was at the water’s edge, to “Put out a little from shore”. He then sat down and taught the crowd.

When Jesus had finished teaching, He told Peter to “Put out into deep water, and let down the nets for a catch.”

The Sea of Galilee is teeming with fish. It seems unbelievable that those fishermen should have “…worked hard all night and haven’t caught anything.”  Yet when they followed Jesus’ instructions, “their nets began to break.” because of the weight of their catch.

They would never have experienced such a wonderful catch if they had not met two important conditions:

It had been a ‘hard day’s night’. They were weary from their efforts and lack of sleep, but Peter responded, “because you say so, I will let down the nets.”

Patience and perseverance are the hallmarks of a good fisherman. Perseverance has been the hallmark of some of the great men and women of history. Perseverance ought to be a characteristic of every Christian yet how quickly we ‘throw in the towel’ when things don’t come up to expectations.

Jesus has instructed us to become fishers of men – to bring men and women into contact with their Saviour. This task requires patience and perseverance.

Some of Jesus’ disciples were professional fishermen. Before Jesus invited them to follow Him they had earned their bread and butter from fishing. Along comes this carpenter and tells them how to do their job! They had every reason to respond – “What do you know about fishing? You stick to preaching and we’ll do the fishing.”

But they were prepared to do what he told them to do. They obeyed and reaped a rich reward.

There are times when fishing is frustrating and unfruitful, but fishermen keep at it because it is their calling. As Christians it is our calling to be fishers of men. Even if at times this may seem frustrating. The task of reaching family, friends and acquaintances for Jesus is not easy. Jesus never said it would be.

The purpose behind this miraculous catch of fish was not to merely give those tired fishermen a bit of encouragement. When Simon Peter saw what had happened, he fell to his knees before Jesus and said, “Go away from me, Lord! I am a sinful man!” Peter had never seen so many fish caught up in a single net before.

Through this amazing miracle, Jesus gained the disciples’ attention. Then He delivered a punch line—“Don’t be afraid; from now on you will fish for people.”

Jesus calls each of us from our daily routine to be His co-workers—fishing for His Kingdom.

An article which appeared in The Westminster Record years ago titled ‘The Fisherman’s Club” is an allegory about a club for fishermen in which every effort is made to promote fishing as a worthwhile occupation. However, none of the promoters or members actually engage in fishing. The article ends with the following challenging words:

Is a person a fisherman if, year after year, he never catches a fish? Is one really following the Master, if he isn't fishing? The Westminster Record, The Fisherman's Club Click To Tweet

This brings to mind the words of a Sunday School chorus,

With a Bible and a prayer

With fishing for Jesus everywhere.”

Fellow Christians we have been called to be fishers of men. Our efforts to reach others for Jesus may at times seem frustrating, but I can assure you there will also be those times of rejoicing when someone you know – a relative, a friend, a colleague, says, “Yes to Jesus.”

Ask the Lord to show you how you can reach an unbeliever for Christ. And then why not listen to that fun children’s song? Click on the link and enjoy these enthusiastic young fishermen!

‘The Babylonians catch people with hooks, as though they were fish. They drag them off in nets and shout for joy over their catch!’

Image by fikret kabay from Pixabay

You will remember that in the last session I asked you whether you had done any fishing.

It amazes me the patience men and a few women exhibit. They will spend hours on end alongside a river or the shoreline with a rod and reel fishing, hoping that a fish would bite. As I mentioned the last session I lack the perseverance to spend time in that way.

Again in this study, our verse focusses on fish and fishing. We saw in the last study how Habakkuk likened people to fish. Here in this verse, he follows up on that picture by referring to Judah’s enemy as evil fishermen.

Once again I am about to give you some indication of my age. Two of the old-time greats, the crooner Bing Crosby and the trumpeter Loius Armstrong, recorded a duet song entitled Gone Fishin. The one complains that when he calls, the other is never at home and the notice on the door inevitably states “Gone Fishing“

Photo by Matt Hardy from Pexels

I love the story from a book, source unknown, that says, A lady giving her testimony commented, “Jesus said, ‘I will make you fishers of men’ and I have been fishing for men ever since.”

Habakkuk pictures Nebuchadnezzar and his army as fishing in the sea of the Middle Eastern world. Their intention being the capture of people, as if their opponents were fish and the army was taking control. In particular their fishing expedition is to catch all the inhabitants of Judea, good or bad, big or small, without exception.

Our adversary has the same goal in mind. He wants to capture us and take control.

Share it with someone you can trust for prayer backing to break the habit.

A skirmish took place in the heavenlies when Satan sought to usurp God’s authority and was banished to our world (Isaiah 14:12-15; Luke 10:18: Revelation 12:7-9). Since his banishment, along with his band of rebellious angels he has concentrated on seducing mankind to live lives apart from God. Let’s make sure he doesn’t get away with it in our lives.

Like the Babylonians, the devil and his cohorts rejoice at their catch when they are able to seduce men and women to disobey the principles of God contained in the Word. More particularly, they want us to reject the Saviour whom God sent to set us free from his bondage.

At times, his enticements are so desirable that it is easy to be tempted.

My wife Shirley and I recently watched a movie entitled ‘Blue Miracle’ involving a group of orphans who served as the crew to a deep sea fisherman. They were participants in a competition to catch the biggest blue marlin. On the second day of the competition, they caught a large marlin on their line but lost it when two of the youngsters fell overboard and had to be rescued.

The good news is that the devil may have us on the line and he may be trying to reel us in but Jesus is available to rescue us if we allow Him to. You see our enemy is a bad fisherman.

Our adversary IS poor at fishing

Never forget he is a defeated foe. Defeated by Christ on the cross of Calvary.

”We are people of flesh and blood. That is why Jesus became one of us. He died to destroy the devil, who had power over death.” (Hebrews 2:14 CEV.)

“Anyone who keeps on sinning belongs to the devil. He has sinned from the beginning, but the Son of God came to destroy all that he has done.” (1 John 3:8 CEV.)

If you are on the devil’s line or if you know of a family member or friend who has been caught by him won’t you pray this prayer.

Gracious Heavenly Father I realise that I/ that …………………. has/have been caught in Satan’s net. I praise You that You have provided the means of our being set free when You sent Your Son Jesus into the world to be it’s Saviour. Thank You Jesus’ for the sacrifice you made on my/…………..behalf. Now I ask that I/that …………………/ may be set free from bondage to Satan and live life in the future to Your glory under the influence of the Holy Spirit. Amen.