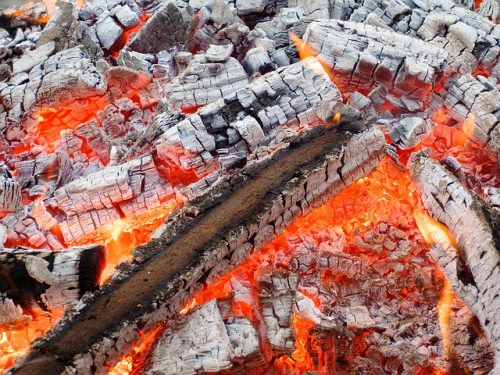 Image by Gerhard Bögner from Pixabay

Most of us have probably at some time in our lives sat beside a campfire. Perhaps in our youth group days. Or maybe as a scout or a guide. Possibly at a family gathering at a picnic spot.

I certainly recall several youth camps and congregational retreats where at least one evening each time was spent out in the open around a campfire.

Our text for this week is about wood-burning fires.

I am the LORD who rules over all. Human effort is no better than wood that feeds a fire. So the nations wear themselves out for nothing.’

Controlled campfires are great, but fire out of control is scary.

Several years back devastating fires raged out of control along what is known as South Africa’s Garden Route. Firefighters battled for days to bring a large number of fires under control. No sooner had they managed to bring one fire under control than another broke out elsewhere.

Our son and his family were living at the time in the small town of Sedgefield. As the fires threatened the town, the citizens were warned to be ready to evacuate. When fires broke out on both sides of the town evacuation was almost impossible. Christian groups throughout the country were praying for the fires to be brought under control. Praise the Lord the fires surrounding Sedgefield were doused.

Another town in the area was not so fortunate. The fire swept into the suburbs of Knysna where many homes were devastated. The Knysna Provincial Hospital was also threatened and patients had to be evacuated.  Today, years later, as one drives through the town evidence of the carnage can be seen in the form of burnt-out ruins of what had once been elegant family homes.

Bringing fire under control is one of the most frightening experiences of life.

Fuel for the fire

Our text verse focuses on the Lord who remains in control despite the futility of human effort which is no better than wood that feeds a fire.

God’s assessment was that the Babylonian’s hard work was all in vain, would amount to “nothing.” Instead, it would turn out to be fuel for the fire of God’s judgment that would burn them up.

“Thus says the Lord of hosts: The broad wall of Babylon shall be leveled to the ground, and her high gates shall be burned with fire.The peoples labor for nothing, and the nations weary themselves only for fire.” (Jeremiah 51:58 ESV)

Babylon’s splendour and its impressive appearance were created by the hard labour of people, in most cases slaves. It was not a labour of love but enforced labour. Yet their labour was in vain because all would be destroyed, never to be rebuilt.

In the last session, we noted that within recent months, buildings and causeways have collapsed because inferior materials were used.

“But each of you must be careful how you build. For God has already placed Jesus Christ as the one and only foundation, and no other foundation can be laid.

Some will use gold or silver or precious stones in building on the foundation; others will use wood or grass or straw. And the quality of each person’s work will be seen when the Day of Christ exposes it. For on that Day fire will reveal everyone’s work; the fire will test it and show its real quality.

If what was built on the foundation survives the fire, the builder will receive a reward. But if your work is burnt up, then you will lose it; but you yourself will be saved, as if you had escaped through the fire.” (I Corinthians 3:10b-15 GNB)

During His ministry, Jesus spoke of Himself as the vine and His disciples the branches. He warned,

“If you don’t stay joined to me, you will be thrown away. You will be like dry branches that are gathered up and burned in a fire.

Stay joined to me and let my teachings become part of you.”(John 15:6,7a CEV)

Unless we stay close to Jesus we will be like the Babylonians, “no better than wood that feeds a fire.” Worth nothing!

Even as Christians it is possible to focus our lives on those things that are combustible (of no lasting value). We will still be saved if we have put our lives in Jesus(See 1 Corinthians 3:15)  But how much better it is to be guided by the Holy Spirit into those activities that are not ‘burnt up’ but carry an eternal value.

Ask the Lord to pinpoint any activity that you are involved in, which is diminishing rather than building up your faith. Verbalise one step you can take to improve or step away from this activity.