Image by StockSnap from Pixabay

‘The LORD replies, “Write down the message I am showing you in a vision. Write it clearly on the tablets you use. Then a messenger can read it and run to announce it.

Waiting and watching reaps its reward. In today’s verse, we read of God’s instructions to Habakkuk:

“Then the Lord told me.” The Lord actually spoke to Habakkuk. And look at what He said:

“I will give you my message in the form of a vision. Write it clearly enough to be read at a glance.

The Lord’s reply contains a very important principle: “Write down the message.” (NIrV)

“Habakkuk I am about to answer your question, but I want you to share my answer with others, so that a herald may run with it.” (Today’s New International Version —The footnote in my Bible reads, “So that whoever reads it may run with it.”)

This instruction is by no means unique

In researching these words I found at least thirteen verses in the Bible containing these or similar words:

Take a look and see for yourself who wrote the ten commandments:

When the LORD finished speaking to Moses on Mount Sinai, he gave him the two tablets of the covenant law, the tablets of stone inscribed by the finger of God. (Exodus 31:18 NIV)

God Himself wrote those all-important commandments onto two tablets of stone which he gave to Moses to share with the Israelites. That tells us just how important God considers writing to be!

“So love the LORD your God with all your heart, soul, and strength. Memorize his laws and tell them to your children over and over again. Talk about them all the time, whether you’re at home or walking along the road or going to bed at night, or getting up in the morning.  Write down copies and tie them to your wrists and foreheads to help you obey them. Write these laws on the door frames of your homes and on your town gates.” (Deuteronomy 6:5-9 CEV)

As the children of Israel drew near to the Promised Land and Joshua was about to take over leadership from Moses,  see what Scripture tells us:

“Moses and Joshua, I am going to give you the words to a new song. Write them down and teach the song to the Israelites.” (Deuteronomy 31:19 CEV)

So it wasn’t just instructions. God gave them songs to write down too!

The Lord speaks to a number of his prophets:

Then Isaiah received this instruction:

“Write down his (the Lord’s) message for his people, so that it would be there forever.” (Isaiah 30:8 CEV)

The Lord instructed Jeremiah in a similar fashion:

On two occasions, the Lord spoke to Ezekiel as follows:

“write down today’s date, because the king of Babylonia has just begun attacking the city of Jerusalem.” (Ezekiel 24:2 CEV)

Explain the regulations about worshiping there, then write down these things, so they can study and obey them. (Ezekiel 43:11)

And in the New Testament:

In Revelation we find God’s instruction to the Apostle John:

Everyone who wins the victory will be made into a pillar in the temple of my God, and they will stay there forever. I will write on each of them the name of my God and the name of his city. It is the new Jerusalem that my God will send down from heaven. I will also write on them my own new name.
(Revelation 3:12 CEV)

Do you write notes?

The whole book of Habakkuk is the story of a man who wrote down his feelings, his prayers, and God’s answers.

If you are anything like me you have a pretty shaky memory. Unfortunately, I am not very diligent about taking time to write down what I believe the Lord is saying to me. Inevitably, within a short period of time, I have forgotten what I have learned.

Times we failed to write something down

There have been at least two significant occasions when God spoke to both Shirley and me through a fellow believer, where we didn’t write them down.

1. The first was in Kimberley, South Africa, when God brought a prophetic message for each of us individually through an evangelist. Just a few hours later, we marvelled at the words and wondered with excitement what they meant for us. A few days later, we began to see the message coming to fruition. But we hadn’t written it down! So we couldn’t remember it clearly.

2. The second came at a seminar we attended in Rhodesia (now Zimbabwe). This came in the form of a word of knowledge through a Bible Teacher from New Zealand. The speaker did not know either of us. He had never met us, even at the seminar. Yet he singled us out in a crowded auditorium and pinpointed an area of concern we each had. He gave us God’s assurance that God would sort out our problems. We were blown away by everything he said, and the sure and certain knowledge we had that the words must have come from God. No one, not even our closest family members, knew the situations the man addressed. The next day, we phoned the director of the seminar to see if the words had been recorded. They hadn’t. And with our fallible memories, we forgot many of them. How sad we hadn’t written them down the moment we had the chance.

“I will give you my message…. Write it clearly enough to be read at a glance.” (Habakkuk 2:2 CEV)

She did write it down

In November 1997, my wife, Shirley, was diagnosed with aggressive breast cancer which had already started to spread. The surgeon who operated on her later admitted that he did not expect her to last a year. (She’s still going strong – praise God!)

At one stage Shirley herself felt that she was not going to make it. But on consecutive days, while reading Scripture, the Lord spoke to her.

She didn’t fully understand what God was saying, except that she had a future—and in that future, she was to tell others what the Lord had done in her life.

And the Lord had more to say:

The next verse was this very verse we’re looking at today!

That caused us a chuckle. For those who know my wife, her handwriting is not the neatest! She was always in trouble at school for her untidy writing. So the Lord reminded her to write it clearly!

So, she obeyed. She was too ill to write very much at a time, but she began to jot down notes, sometimes just one or two words. She wrote through the radiotherapy and two courses of chemotherapy that followed her surgery. And five years later, she started to create a full journal. Those journal notes subsequently were the foundation for her first book, ninety days of devotions for people facing cancer, Strength Renewed – Meditations for Your Journey through Breast Cancer.

That book was published in 2012—nine years ago. And it is still selling. (By the way, if you’re interested in getting a copy, it is available on Amazon world-wide, or here in South Africa direct from Shirley.) By sharing what the Lord had done through the cancer valley, Shirley has been a source of courage for numerous other cancer sufferers. But it was only possible because she listened to the Lord and wrote down events as they happened. 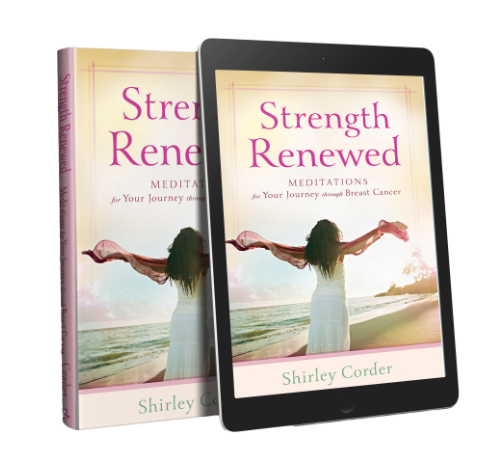 Praise God for the wonderful assurance that we have that our lives are not purposeless. God has a purpose for each of our lives.

“For I know the plans I have for you,” declares the LORD, “plans to prosper you and not to harm you, plans to give you hope and a future.” (Jeremiah 29:11 NIV)

So may I end today with a challenge? Maybe you already write down what the Lord is doing in your life. Then ask yourself, what does He want you to do with those notes? And if you don’t make notes? Reread God’s words to so many people in Scripture, and get yourself a notebook, today. Start to write it down—and make it clear!