Many of our activities are affected by the weather.

Some folk make a practice of checking out the weather forcast before making any plans for the day. Problem is, sometimes it looks as if the weather man doesn’t look to see what it’s supposed to be like!

Often an outdoor sporting event has had to be rescheduled because of heavy rain accompanied by thunder and lightning. I recently saw a short clip of a football match actually played in thick snow.

In this week’s text verse the prophet uses strange language when he is actually describing weather conditions.

“At the flash of your speeding arrows and the gleam of your shining spear, the sun and the moon stood still.” 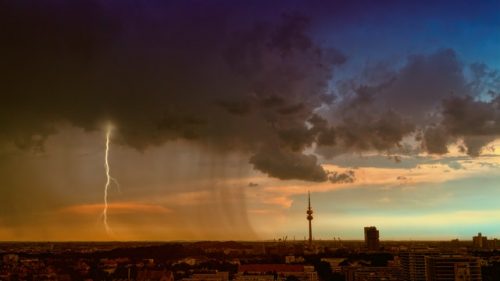 The prophet continues to reflect on God’s involvement with His people in the past.

The speeding arrows and the shining spear, speak of hail mixed with lightning.

One of the towns that I ministered in was Krugersdorp where we often experienced thunderstorms in the afternoon. On one occasion my wife Shirley and I were out of town leaving our two teenage sons at home alone. It proved a terrifying time for them for there was a horrendous hailstorm. The hailstones were as big as tennis balls and actually broke through the roof tiles above our lounge area. They collected some huge rocks of ice from our sitting room carpet and stored them in the freezer to show us.

The prophet’s words were a reminder of how God enabled the Israelites to overcome the Amorites en route to their conquest of the Promised land.

The LORD made the Amorites panic at the sight of Israel’s army. The Israelites slaughtered them at Gibeon and pursued them down the mountain pass at Beth Horon, keeping up the attack as far south as Azekah and Makkedah. While the Amorites were running down the pass from the Israelite army, the LORD made large hailstones fall down on them all the way to Azekah. More were killed by the hailstones than by the Israelites (Joshua 10:10,11 GNB). [Bold added.]

During the same battle against the Amorites, scripture records an amazing scene. Joshua actually took control of the elements.

Joshua spoke to the LORD. In the presence of the Israelites he said, “Sun, stand still over Gibeon; Moon, stop over Aijalon Valley.” The sun stood still and the moon did not move until the nation had conquered its enemies. This is written in The Book of Jashar. The sun stood still in the middle of the sky and did not go down for a whole day.  Never before, and never since, has there been a day like it, when the LORD obeyed a human being. The LORD fought on Israel’s side!”( Joshua 10:12b,13,14 GNB) [bold added]

Joshua appears to have received confirmation from God before instructing the sun and moon to a standstill.  He then gave the command and God held back the movements of both sun and moon. This is endorsed by the words,  “Never before, and never since, has there been a day like it, when the LORD obeyed a human being.”

HOW CAN THIS BE?

While many may accept that hail and lightning rained down upon Israel’s opponents, the story of Joshua commanding the sun to stand still is usually brought up to demonstrate the imperfection of Scripture. People don’t believe it actually happened.

Numerous interpretations of this passage have been put forward. To quote a few:
1. The passage is poetical and not to be taken literally.
2. The sun “standing still” refers to an eclipse of the sun.
3. Alternatively, the earth stopped its rotation around the sun for almost 24 hours.
4. Or the earth’s rotation was actually slowed down, not stopped. This lengthened the day by almost 24 hours.

A story has been circulated that a Yale astronomer found that the earth was twenty-four hours out of schedule. The astronomer started to read the Bible from the beginning to see if the Bible could explain the missing time. When he came to the account of the long day of Joshua, the astronomer rechecked the figures and found that at the time of Joshua’s battle with the Amorites only 23 hours and 20 minutes were lost.

He came to the conclusion that the Bible was not the Word of God because there was an error of 40 minutes. However, a colleague, Professor Totten, showed him that the Bible does not say twenty-four hours, but rather “about a whole day” (ASV, ESV. KJV).

In his book Seal of God’, F C Payne refers to another biblical incident involving the unusual movement of the sun.

Hezekiah had asked for a sign that the Lord would heal him. The Lord gave him the choice that either the shadow on the sundial would go forward, or it would return backward. Hezekiah asked the Lord to move it backward and “He brought the shadow ten degrees backward, by which it had gone down…” (‘Seal of God’  by F C Payne – page 58) 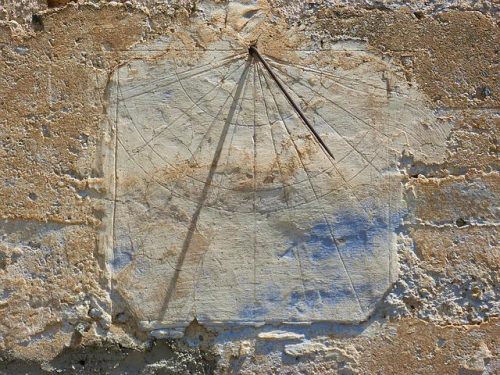 Image by Marc Pascual from Pixabay

While these two articles might provide an exciting verification of scripture, the Bible does not need scientific confirmation. Jesus reminds us that, “We know that Scripture is always true.” (John 10:35 NIrV)

The Bible contains many miracles but does not explain how God caused them to happen.  He may choose to amplify an existing natural law, as was the case in Noah’s Flood.

Alternatively, the miracle may be the outcome of God’s perfect timing of natural events such as we have been seeing in our study. God’s separation of the Red Sea through a strong wind which blew all night (Exodus 14:21). Also, the opening up of a path through the Jordan River (during a flood season) to enable Israel to enter the Promised Land (Joshua 3:16)

As a facinating exercise, why not read the full account of the above two amazing events as we find them in Joshua 10 and 2 Kings 20? Then praise the Lord that God’s Word is true. That even when the weather seems to be uncontrolled God still has the weather under His control.