When we see a battalion of soldiers on the march, how it stirs the emotions. How much more so if you are in a country under attack, like Ukraine is at the moment.

In our text this week the prophet pictures God on the march throughout the earth in the cause of justice. 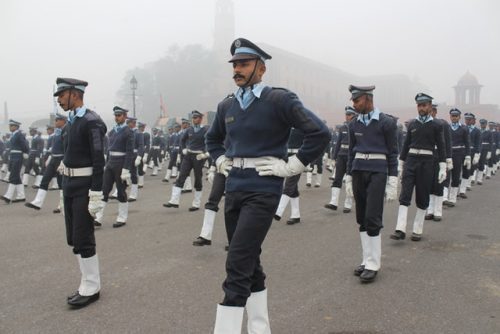 ‘You marched through the earth in fury; you threshed the nations in anger.’

The term, march, as in our text verse, is frequently used to describe military campaigns with the purpose of carrying out judgment.

According to Clarke’s Commentary,  “This refers to the conquest of Canaan. God is represented as going at the head of his people as general-in-chief, and leading them on from conquest to conquest.”

He adds, “you threshed the nations in anger.”  this can be likened to what oxen do to the sheaves on the threshing floor.

The commentator Smith asks the question, “Who did He thresh? Was this a reference to the church?”

Smith continues, “No. That’s inconsistent with God. The great judgment is directed against the heathen, not against God’s people . . . You see indignation and His wrath upon the heathen. But for His people, salvation; that is, deliverance.” (Smith’s Commentary)

Here in this verse, the term march is referring to God’s awesome unhindered progress as He leads His people onward in their victory against their enemies.

“When you, LORD, went out from Seir, when you marched from the land of Edom, the earth shook, the heavens poured, the clouds poured down water.” (Judges 5:4 NIV)

“Wait until you hear a sound like troops marching through the tops of the trees. Then attack quickly! That sound will mean I have marched out ahead of you to fight the Philistine army.” (2 Samuel 5:24 CEV)

God, when you took the lead with your people, when you marched out into the wild, (Psalms 68:7 The Message). (Bold mine.)

Threshing in the verse refers to the way a farmer threshes his wheat. God separates His children from those who are lost, as the wheat is separated from the chaff.

John the Baptist prophesied concerning the Messiah, “He has his winnowing shovel with him to thresh out all the grain. He will gather his wheat into his barn, but he will burn the chaff in a fire that never goes out.” (Matthew 3:18 GNB)

Jesus took up this same concept in the parable He told of the wheat and the weeds.

A man sowed good seed in his field. One night, when everyone was asleep, an enemy came and sowed weeds among the wheat. The man’s servants came to him and said, ‘Sir, it was good seed you sowed in your field; where did the weeds come from?’ ‘It was some enemy who did this,’ the owner answered. ‘Do you want us to go and pull up the weeds?’ the servants asked. ‘No, because as you gather the weeds you might pull up some of the wheat along with them. Let the wheat and the weeds both grow together until the harvest. Then I will tell the harvest workers to pull up the weeds first, tie them in bundles and burn them, and then to gather in the wheat and put it in my barn.’ ” (from Matthew 13:24b-30 GNB)

Jesus went on to say, “. . . . the same thing will happen at the end of the age: the Son of Man will send out his angels to gather up out of his Kingdom all those who cause people to sin and all others who do evil things, and they will throw them into the fiery furnace, where they will cry and gnash their teeth. (Matthew 13:40b – 42 GNB)

The enemy Jesus alluded to in the above story is none other than Satan.

Have you ever watched the movements of a chameleon? It changes colour to that of whatever it is resting on so that it is invisible to its prey. Satan has the same ability to take on another form, one which we will not fear. Paul warned the Corinthian believers that “Even Satan tries to make himself look like an angel of light.” (2 Corinthians 11:14)

Satan and his emissaries are very active in the world. They often don’t march around waving banners. His followers may even be hidden within the membership of the church. The weeds that Jesus spoke about will always be there, maybe undetected by you and I, but known to God. Jesus assured us that God will deal with them at the end of the age.

Our role is not to determine who we think are wheat or weeds. Our role is to concentrate on allowing the Holy Spirit free reign in our lives so that we will grow more like Christ. That we may look like healthy wheat.

“God’s Spirit makes us loving, happy, peaceful, patient, kind, good, faithful, gentle, and self-controlled. There is no law against behaving in any of these ways.” (Galatians 5:22,23 CEV)

ON THE MARCH TO EASTER

We are in that period of the year known as Lent. Easter is only a short time away. So in the Church we begin to focus less on Jesus the teacher and miracle worker. Instead, we focus more on the Christ of Calvary. We remember how God, in the form of His Son Jesus Christ, marched into our world to rescue us from the penalty of sin.

In closing, this study won’t you pray along with me now?

Loving Heavenly Father I thank You for the amazing love You demonstrated when You sent Jesus into our world as our Saviour.

Lord Jesus, I thank You for Your life here on earth, for Your teachings. Above all else, I thank You for going to that cruel cross to take upon Yourself the burden of my sinfulness. Thank You for sending the Holy Spirit to help me live life to God’s glory.

Holy Spirit please grow in me those characteristics which will turn me  into healthy wheat. Amen