What should our attitude be towards the poor?

“You pierced with his own arrows the heads of his warriors, who came like a whirlwind to scatter me, rejoicing as if to devour the poor in secret.” 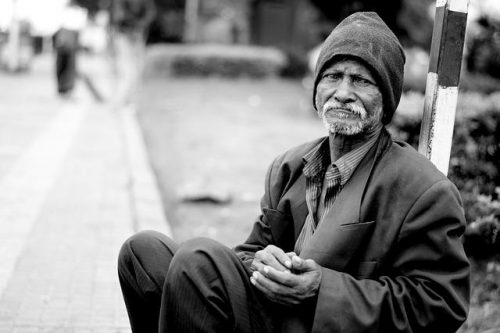 The prophet Habakkuk speaks of God coming to the rescue of His own from the assaults of their enemy.

The term ‘heads’ could possibly indicate the conquering kings. Many commentators feel ‘heads’ may also refer to the heads of the enemy villages as comes across in the King James Version, “Thou didst strike through with his staves the head of his villages”.

God not only dethroned kings in his vengeance but He devastated the enemy’s villages in retribution for what they had done to His people, Israel.

Notice the prophet associates himself with his people when he describes how the foe ‘came like a whirlwind to scatter me.‘

The Babylonians (Chaldeans) were extremely cruel in their conquest of neighbouring nations. They especially preyed on the poor.

Whereas our text, taken from the ESV, speaks of the ‘poor’, various other versions have other interpretations:

As I prepare for this study the world is devastated at the horrific onslaught against the Ukrainians. All of the above terms describe the predicament of the Ukrainians. Millions of the aged, women, and children, have had to flee from their homes and country. With little more than they were able to carry they have become refugees in neighbouring nations. This has caused a major problem for those nations having to cope with such an alarming influx.

Although reporters are telling of atrocities taking place on both sides of this pointless war, there have also been many stories, supported by the media, where Ukrainians have been loving toward captured enemy soldiers, feeding them, tending to their wounds and even allowing them to make contact with loved ones back in Russia. by cellular phone.

The saying, ‘the rich get richer and the poor get poorer,’ is so true in our country in South Africa.  Funds available for the poor and needy have been selfishly seized and utilized by the more fortunate. As we watch global news it becomes apparent we are not the only country going through this dishonesty and corruption.

I’ve heard a story of an English professor who was throwing questions at his class. One of his students rose to answer with his book in his left hand instead of his right hand, as was the general practice. Angrily the professor thundered at him, “Take your book in your right hand and be seated!“

The student held up his right arm, which had been amputated at the wrist. The great man hesitated for a moment. Then he went up to the student and, with tears streaming from his eyes said, “I never knew about it. Will you forgive me?”

This request for forgiveness resulted in that student becoming a Christian.

WITH THE POOR IN MIND

Jesus has a special place in His heart for the poor. and oppressed.

As Christ’s followers, we are stewards of what the Lord has given us.

‘God is able to bless you abundantly, so that in all things at all times, having all that you need, you will abound in every good work. As it is written: “They have freely scattered their gifts to the poor; their righteousness endures forever.’ (2 Corinthians 9:8,9; Psalm 112:9 NIV)

Jesus said, ‘The poor you will always have with you, and you can help them any time you want. ‘ (Mark 14:7)

Yes, the poor will always be around.  And we cannot help them all. Therefore we need to be sensitive to the prompting of the Holy Spirit as to whom we reach out to and help.

Here in South Africa in the major cities, it is the practice of folk seeking a handout to stand at busy intersections with placards requesting help.

A group of seniors from a retirement village noticed a lady standing at a particular corner day after day. They decided that they would offer her a paid job in each of their homes once a week so that she would have a regular daily income. When one of the group approached this lady with their offer, she simply laughed and said, “I get more by standing here on this corner than you could ever pay me.”

As a minister in Beaconsfield, Kimberley, we soon discovered that Kimberley was a halfway house between Johannesburg and the Cape so we were constantly approached by folk wanting a handout. Because of these numerous appeals my wife and I had to be sensitive to the Spirit’s prompting.

On one occasion, I was approached by a man who said he had just been released from prison and needed to get to Cape Town. I arranged for him to meet me at the station when the next train to Cape Town was due. My wife made up a small food parcel and I bought him a second class ticket to Cape Town. I saw him onto the train and watched as it departed. When I got back home I commented, “Well if he’s pulling a fast one He will have to remain on the train for a long way before the train’s next stop.”

Weeks later I received a phone call from my parents in Cape Town to say that the same gentleman had looked up our not common surname in the phone directory. He had found out where they lived and had called on them. He asked them to please convey his thanks to their son for helping him to get to Cape Town.

Some months ago, a group of us walked to a store a few blocks away from my son’s home. We passed a shabbily-dressed man squatting on the corner. We greeted him, and he returned our greeting. He didn’t ask for anything. While we were in the shop, one of our daughters-in-law picked up a bunch of bananas. We pointed out there were plenty at the house, but she proceeded to the till and paid for them.

On our way home, she cross the road, handed the bunch of bananas to the man, and joined us again. Such a simple gesture and they hadn’t cost much. But, besides being nutritious and filling, I’m sure that simple gift made that man’s day.

It’s a great feeling to know that you have been able to help someone with a genuine need, but there are so many con artists that guidance of the Holy Spirit is essential.

In closing please give serious thought and prayer to whether and how the Lord wants you to help someone you know of who is in desparate need. If you’re in a group, or perhaps seek out a friend to chat with, discuss ways you can help the poor in a constructive way. It could be as simple as a bunch of bananas.

PS. If you haven’t yet read the background to the prophecy, please do. It will benefit you throughout this series of studies.