Where are you going?  This is a question that we are often asked throughout our lives.

Dr. Albert Einstein, the great physicist, was once traveling from Princeton on a train when the conductor came down the aisle, punching the tickets of each passenger.

The conductor continued down the aisle punching tickets. As he was ready to move to the next car, he turned around and saw the great physicist down on his hands and knees looking under his seat for his ticket.

The conductor rushed back and said, “Dr. Einstein, Dr. Einstein, don’t worry. I know who you are. No problem. You don’t need a ticket. I’m sure you bought one.”

Einstein looked at him and said, “Young man, I too know who I am. What I don’t know is where I’m going.” (Sermon lllustrations contributed by Christian Cheong)

In the Bible we read of a man who found himself in a similar situation, not knowing where he was going. He lacked the assurance that he belonged to God. 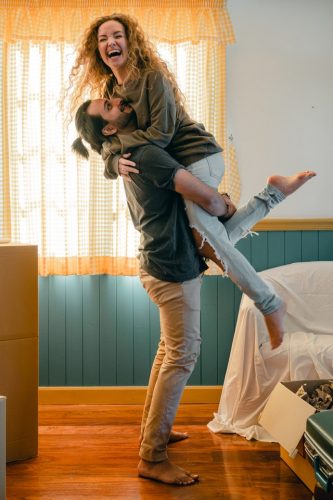 That sense of belonging – Photo by Ketut Subiyanto

Nicodemus.  Was a Jewish religious leader. Yet he didn’t feel he belonged to God. He sensed that Jesus, the preacher from Galilee, could help him. But he was afraid of what his colleagues, who were strongly opposed to Jesus’ ministry, might think. So, Nicodemus visited Jesus one night when the crowds had gone home and his colleagues would not be around.

He was seeking an answer to a variation of our question,  How can I be sure of where I’m going?

As a spiritual leader and a teacher amongst the Jews, like many others he was looking for their coming Messiah and the setting up of God’s Kingdom. He wanted assurance that he would be a citizen of that kingdom when the time came.

THE ROOT OF THE PROBLEM

He opened the conversation with a bit of small talk, “Sir, we know that God has sent you to teach us. You could not work these miracles unless God were with you.” (John 3:2 CEV)

Before Nicodemus could even pose his question, Jesus knew what was on the man’s mind. He got right to the root of the problem. “You must be born from above before you can see God’s kingdom.” (John 3:3 CEV)

Note—Jesus didn’t say “Nicodemus as a Pharisee and a Jewish leader you have nothing to worry about, you have automatically qualified to become a citizen of God’s kingdom. No! Jesus made it clear that certain steps had to be taken before one could have that assurance. “Before you can get into God’s kingdom; you must be born not only by water, but by the Spirit.” (John 3:5 CEV)

Jesus emphasis was that where everyone on this earth has been born of water. Our mother’s waters broke at our birth. But to get into God’s kingdom one needs a second birth. “I tell you for certain that you must be born from above before you can see God’s kingdom!” (John 3:3 CEV)

Nicodemus was understandably confused. It’s just not possible for us to re-enter our mother’s womb and be born a second time. Some of us may also get confused by religious terminology: – you must be born from above – born again – saved – converted.

Jesus’ comment was down to earth. “I tell you for certain that before you can get into God’s kingdom, you must be born not only by water, but by the Spirit…. Only God’s Spirit can change you into a child of God.” (John 3:5,6 CEV)

We were all born physically but we also need to be born spiritually. But it’s not something that we do it’s something the Holy Spirit does when we enter into a relationship with God through faith in Jesus.

Jesus explained that if Nicodemus wanted to know for sure that he belonged to God, he needed to stop relying on the old traditions and move into a definite relationship with God.

The gospel writer John tells us, “Some, however, did receive him [Jesus] and believed in him; so he gave them the right to become God’s children.” (John 1:12 GNB) John indicates that a relationship with God requires two important steps on our part;

The passage does not tell us that Nicodemus took those two important steps, so how do we know that he was converted? a.k.a. born again?

Two further passages of scripture reveal that the direction of his life was changed.

Jesus’s popularity was growing rapidly so the temple guards were sent out by the priests and Pharisees to arrest Him. They returned empty-handed with the excuse, “No one has ever spoken like that man!” (John 7:46 CEV)

This brought about a heated debate. ‘These people who don’t know the Law are under God’s curse anyway”‘ (John 7:49 CEV). Nicodemus, who was a member of the council spoke up, ‘”Our Law doesn’t let us condemn people before we hear what they have to say. We cannot judge them before we know what they have done.”‘ (John 7:51 CEV)

Nicodemus was no longer prepared to go with the flow. Instead, he openly confronted his religious colleagues with their judgmental attitude towards Jesus.

The clearest evidence of the change in Nicodemus is seen at the end of Jesus’ earthly ministry. After Jesus’ death on the cross, Nicodemus showed that he belonged to Jesus’s band of disciples by being involved in His burial.

“Joseph of Arimathea asked Pilate for the body of Jesus. Now Joseph was a disciple of Jesus, but secretly because he feared the Jewish leaders. With Pilate’s permission, he came and took the body away. He was accompanied by Nicodemus, the man who earlier had visited Jesus at night. Nicodemus brought a mixture of myrrh and aloes, about seventy-five pounds.  Taking Jesus’ body, the two of them wrapped it, with the spices, in strips of linen. This was in accordance with Jewish burial customs.” (John 19:38-41 CEV)

God is looking for folk who are more than churchgoers. He wants us to become His children and know that we belong in His heavenly family.

A PLACE TO BELONG.

Church leaders in Minneapolis, USA met for a brainstorming exercise, to compile a statement of purpose. They were looking for something free from religious jargon but geared to the people who attended their church.

After much debate, they came up with the church’s new slogan – ‘A place to belong, a place to become.’ (Rick Warren – ‘The purpose driven life.’)

A Christian community that seeks to help people to have a sense of belonging and a realization of what they can become for God, is always going to attract newcomers.

Belief only becomes true faith when you and I accept that Jesus died on the cross as the penalty for our sin. We enter into a relationship with Jesus, by receiving Him—inviting Him to take over control of our lives.

Where are you going?

Like Nicodemus and Dr. Einstein, are you uncertain of your destination?

Do you lack that feeling of belonging?

Do you need to take steps to enter into a real relationship with God through Jesus?

God, through His amazing grace, sent Jesus into our world so that each one of us can know for certain that our final destination is heaven and we can have that sense of belonging.

To have that assurance you need to believe Jesus is your Saviour and you need to receive Him into your life as Lord.

Whether you have already done this, or if it’s a first time move, how about joining in this well-known hymn. As you sing, feel yourself handing your whole self—body and spirit, over to Jesus.