The annual open-air Carols by Candlelight service had been disrupted by a thunderstorm. Everyone moved into the Church. The service required the participation of a number of folks to take the scripture readings.

The minister welcomed everyone and opened in prayer. At the end of the prayer, he quietly moved into the background, without introducing the first reader, who silently came forward to take the reading.

A little boy in the front row of the congregation opened his eyes and in shocked dismay turned to his mother and said, “Mummy, where’s God gone?”

When we think of how highly commercialized Christmas has become, one might well ask, “Where has God gone?” 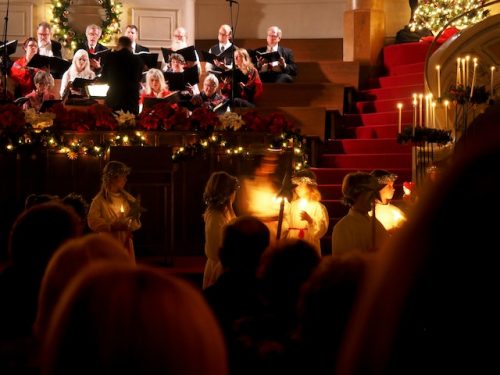 A DIFFERENCE FOR A COUPLE

Because of God’s amazing love for our fallen world He sent His Son Jesus Christ, to invade our world. His coming made a significant difference to the lives of many at the time.

The news of Mary’s miraculous pregnancy threw Joseph’s life into turmoil. Our loving God put Joseph’s mind at rest about marrying Mary, by sending an angel to explain Mary’s pregnancy.

Emperor Augustus’ census forced Joseph and his young wife to make the long tiring journey to Bethlehem at the height of her pregnancy, where there was no accommodation available at the local inn.

The pregnancy, birth and infancy of Jesus certainly made a difference in the lives of his earthly parents.

Out in the fields the  shepherds received a glorious heavenly visitor with the news that a Saviour had been born.

Later in Bethlehem they found the couple with their special child. “As the shepherds returned to their sheep, they were praising God and saying wonderful things about Him. “ (Luke 2:20 CEV)

For some time into the future their lives would have been different as they excitedly told their story.

They spotted a new star, which for them indicated the birth of the king of the Jews. They put everything on hold. Packed their bags and headed for Jerusalem to worship this newborn king. A journey from the east which would have taken them almost two years.

For the Magi the birth of Christ made a huge difference. It called for a sacrifice of both time and treasure.

He also made a difference for: Simeon,  and Anna as we saw in Advent 1.

Christ’s coming definitely made a vast difference in the lives of all of the folk involved in Christ’s birth and infancy.

JESUS’ INFLUENCE THROUGHOUT HIS MINISTRY.

Throughout His three year ministry Jesus continued to make a difference in the lives of those He came into contact with. Sick were healed, dead were restored to life, and many demon possessed were set free.

The fishermen, Peter, James and John and others, became “Fishers of men”.

Tax Collector, Matthew was transformed from the writer of tax records to the recorder of Jesus’ teachings and miracles.

Another Tax Collector, Zacchaeus promised to give half of his possessions to the poor and return fourfold any money that he had extracted dishonestly.

A prostitute, Mary Magdalene turned from her sinful lifestyle and became a faithful follower of Jesus.

Christ’s coming made a difference in the lives of many who met Him during His earthly ministry.

JESUS MADE A DIFFERENCE DOWN THE YEARS.

Down the years Jesus has made a difference in the lives of  many others.

A diving accident in 1967 left Joni Erickson Tada a quadriplegic in a wheelchair. Through faith in Jesus she has overcome her handicap.

Niki Cruz, a former gang leader opened his life to Jesus and now has a successful ministry to gangland youth.

Charles Colson jailed for Watergate-related charges. Became a committed Christian, a leader in the Christian right movement, and author of at least 20 books.

As they have opened their lives to Jesus as Saviour and Lord, Christ has continued to make a difference down the centuries

HAS HIS COMING CHANGED YOU?

God has not gone, as the little boy thought, God has come! He came into our world in the person of His Son, Jesus Christ – Emmanuel – God with us! He continues to ring the changes in the lives of those who put their trust in Him.

As we move on from Christmas, make sure that the celebration of  Jesus’s birth has made a difference in your life. In the year that lies ahead don’t  live  your life as if He had never come.