Did you ever read the book ‘A man called Peter’?

“A man called Peter” was written by Catherine Marshall about her deceased husband Peter Marshall, a Presbyterian minister who had been chaplain to the President of the United States.

Our readings this session focus on another man called Peter.  There are three major highlights in his life, although there are many other passages that mention him. 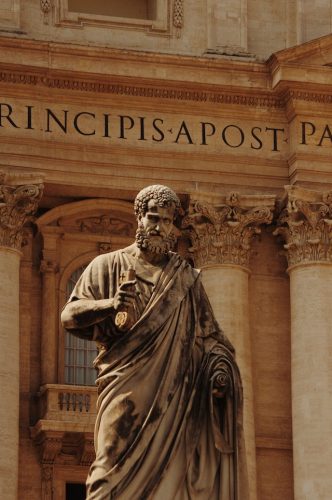 Like a number of other disciples of Jesus, Simon Peter was a fisherman.

Andrew, his brother was a disciple of John the Baptist. One day Jesus approached as John was baptizing folks in the Jordan River at Bethabara. John proclaimed to his followers, “Look, the Lamb of God!” (John 1:36b) Andrew and John, another of John’s disciples followed Jesus and spent the rest of the day with Him.

Andrew then went and found his brother Simon and introduced him to Jesus. Jesus looked at him and said, “You are Simon, the son of John. You will be called Cephas” (which is translated Peter) (John 1:42).

Although from the outset of his gospel John calls him Simon Peter it would appear that his name was actually Simon until Jesus renamed him Peter.

Like many others, I have been puzzled at the seeming clash between John’s account of Peter’s calling as above and what we read in Matthew’s gospel.

Matthew states, “While walking by the Sea of Galilee, he saw two brothers, Simon (who is called Peter) and Andrew his brother, casting a net into the sea, for they were fishermen.   And he said to them, “Follow me, and I will make you fishers of men” (Matthew 4:18,19 ESV)

In an article with the title immediately above, Charles Spurgeon explains the dilemma. He points out that John’s account is of Peter’s initial conversion and calling to become Jesus’s disciple.

Then in Matthew, we have an account of a second, later calling. After a miraculous catch of fish along with Andrew, James, and John, Jesus called them to become evangelists—fishers of men.

Spurgeon sees Peter’s third calling as when he was called to be a leader—one of the twelve Apostles who would become the founders of a new religion—Christianity.

On one occasion when Jesus and His disciples were able to get away from the crowds, they were in the area of  Caesarea Philippi. Jesus took the opportunity to cross-question the disciples. “Who do people say that the Son of Man is?”  His disciples came up with several answers: John the Baptist, Elijah, Jeremiah or one of the other prophets.

It was Peter who came up with the reply, “You are the Christ, the Son of the living God.”

To which Jesus responded, “You are blessed, Simon son of Jonah, because flesh and blood did not reveal this to you, but my Father in heaven!” (Matthew 16:17 NET)

The twelve were gathered together with Jesus in the Upper Room for the Passover meal. During the meal, Jesus washed their feet. Jesus then announced that one of them would betray Him and the others would desert Him.

Jesus informed Peter, “Simon, Simon! Listen! Satan has received permission to test all of you, to separate the good from the bad, as a farmer separates the wheat from the chaff. But I have prayed for you, Simon, that your faith will not fail. And when you turn back to me, you must strengthen your brothers.” (Luke 22:31,32 GNB)

Peter’s immediate  response was, “Lord, I am ready to go to prison with you and to die with you!” (Verse 33 GNB)

But Jesus answered, “The rooster will not crow tonight until you have said three times that you do not know me.” (Verse 34 GNB)

After the Passover meal, the eleven of us along with Jesus went to the Garden of Gethsemane where Jesus spent time in agonizing prayer. We were so tired we fell asleep. Suddenly Judas was there with a number of temple guards who promptly arrested Jesus.

The other disciples fled, but John and I followed at a distance. Jesus was taken to the home of the high priest. I was outside at the gate until John fetched me.

I went to sit with the servants and temple police, who were trying to keep themselves warm in front of a charcoal fire. Three times someone accused me of being part of Jesus’s group. Each time I denied this.  After the third time. a rooster crowed and I noticed Jesus turn and give me a long look. Then I remembered what he had said about me denying him. I felt awful. I went away and wept.

Although I heard what was happening to Jesus,  I couldn’t bring myself to go to Calvary. I couldn’t bear to see them crucify him.

After Jesus’s resurrection, the disciples were told to meet Him in Galilee. Peter’s spirit was still wounded by his denials, so Jesus deliberately reconstructed a whole series of events to bring that troubling memory to the surface. (See session 12 – Deja vu.)

Then after breakfast, Jesus singled Peter out and began His healing therapy.

The third time Peter responded, “Lord, you know everything. You know I love you.” ((John 21:17 The Message)

Three times he tells Jesus “I love you.”

By this threefold challenge not only was Peter assured of his restoration but he was also re-commissioned by Jesus. In effect, Jesus said, “Love me… go and care for my flock”

Then Peter heard again those wonderful words, he first heard years before alongside that same Galilean Sea, “Follow me!” (John 21:19)

Peter went on to become a faithful and influential leader in the New Testament church.

We’ve all failed our Lord. Like Peter, we need the assurance that all is forgiven.

Just as Jesus went to amazing lengths to restore Peter our Lord wants us to be assured of forgiveness and restoration.

Until those hurtful memories of your failure are dealt with, you can never be the person that God intends you to be. Click To Tweet

In closing, I suggest you bring any areas of hurt to Jesus in prayer and ask Him to bring about a healing. Pray along with this song.