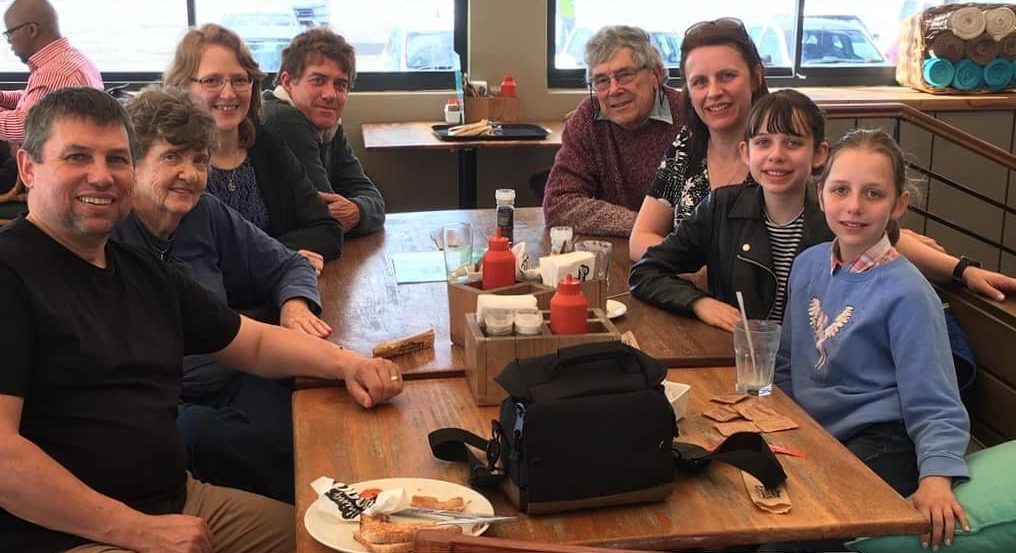 Do you recall getting an unexpected invitation to some special celebration dinner? 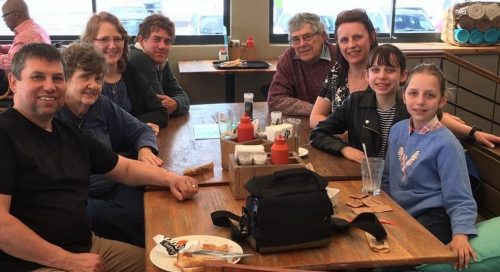 TOGETHER FOR THE FIRST TIME AFTER TWELVE YEARS

This photo was taken here in Port Elizabeth, South Africa, during an unexpected bonus when our daughter and son-in-law came to visit all the way from Montenegro, and our niece, nephew, and lovely great-nieces were on holiday from Northern Ireland. What a special moment!

Our passage of scripture is all about an unexpected dinner invitation.

When Jesus’ hometown, Nazareth, rejected his ministry, He moved to Capernaum where he made his home base. (Matthew 4:13-16)

One day, some men brought a paralysed man on a mat to Jesus.  Jesus assured the paralysed man, “Take heart your sins are forgiven.“

Some teachers of the law immediately accused Jesus of blasphemy. Jesus asked them if it was easier to say, “Your sins are forgiven” than to say, “Get up and walk.” Then He went on to make an amazing claim, “the Son of Man has authority on earth to forgive sins.“

Jesus has God-given authority to forgive your sins and mine.

The Rev Peter Marshall a Presbyterian minister, during the early part of the last century had the honour of being chaplain to the President of the United States.

“One night a friend questioned Peter Marshall about whether he really thought we shall ever have to stand before God on Judgement Day and hear the roll call of our sins.

“Yes!” the Bible makes it quite clear.” Peter answered promptly. “Someday, somewhere, somehow, there will be an accounting for each of us.”

He paused and seemed lost in thought as he stirred his third cup of tea. “I think I may have to go through the agony of hearing all my sins recited in the presence of God.”

But I believe it will be like this – Jesus will come over and lay His hand across my shoulder and say to God, “Yes! All these things are true, but I am here to cover up for Peter. He is sorry for all his sins, and by a transaction made between us, I am now solely responsible for them.” (‘A Man called Peter.’ – Catherine Marshall)

As Jesus and his disciples were leaving Capernaum they encountered a tax collector at his booth. Several of the older bible translations such as the American Standard Version and King James Version, label him as a publican.

A publican is generally a ‘keeper of a public house’ (Collins English Dictionary). We may regard a public house as a pub or tavern. But in biblical terms, it referred to someone fulfilling a public office such as that of a tax collector.

Though a Jew, he had a Greek name: Matthew. The gospel writer Mark calls him Levi son of Alphaeus (Mark 2:13). So it is possible that he was a brother to James son of Alphaeus who became one of the 12 apostles. (Matthew 10:3)

Jesus simply said, Follow me and Matthew got up and followed him.

Matthew had a lucrative job. Employed by the Roman authorities to collect taxes from the people—his own people—you can count on it that he submitted a certain amount regularly to his bosses. But you can also be sure that he took his own cut.

Yet when Jesus invited him to become a follower, he didn’t hesitate. He left his tax booth immediately. Perhaps more than any of the other disciples, Matthew had a better grasp of the cost of following Jesus. Yet he did not hesitate.

The disciples’ Peter, Thomas, Nathaniel, James, and John could go back to fishing, (John 21:2) as they did after Jesus’ resurrection, but Matthew burnt his bridges. There was no way he would get his job back.

Some who have taken that step have been cut off from family and regarded as dead. Others have lost their lives.

I recently read a novel that deals with this very thing. A Muslim converted to Christianity who dared not return to his hometown for fear of being murdered by his own family. And this is not unique.

In my ministry, I witnessed the opposite. The son of a couple in one of my congregations fell for a Jehovah’s Witness lass. Leaders of that sect ordered him to become a member before their marriage and to have nothing more to do with his family. He refused to even chat with me. His family was devastated.

Initially, the other disciples would probably have been wary of Matthew. Jews who served the Roman authorities were generally despised by their fellow Jews.

Matthew was so excited about becoming a follower that he did an amazing thing. He set up a dinner at his home, to which he invited Jesus. He also invited his fellow tax collectors, and many others who had a bad reputation, to dinner to meet Jesus.

Not the kind of thing that I would have done. I think I would want to allow my associates and friends to gradually get the message that I had become a Jesus follower.

There are always troublemakers around, no matter what group you may be part of. Unfortunately even in Christian circles.

Somehow, the Pharisees soon got wind of this gathering and confronted Jesus’ disciples, Why, does your teacher eat with tax collectors and sinners?

I like the way Eugene Peterson puts it in The Message,

“What kind of example is this from your Teacher, acting cozy, with crooks and riff-raff?” (Matthew 9:11b The Message)

Jesus overheard and responded, “Who needs a doctor: the healthy or the sick?” (Matthew 9:11b The Message) He added “I have not come to call the righteous, but sinners.” (Matthew 9;13b NIV)

So Matthew responded unhesitatingly to Jesus’ invitation and held a dinner to give his colleagues and cronies an opportunity to hear Jesus.

I can think of two significant changes.

When you opened your life to Jesus and decided to follow Him, you became a new person – one of His disciples.

Each of us is a work in progress. At the time of our birth, God gave us certain characteristics and abilities. When we put our trust in Jesus we received the Holy Spirit into our lives.  As we allow the Spirit to have greater control He uses those very God-given characteristics and capabilities for the work of Christ’s kingdom.

In the eyes of many, Matthew was a nobody, a traitor to his own, but then he met Jesus, and his life was entirely transformed. You may feel like a nobody. You may feel that your life is going nowhere. But Jesus wants to make a difference in your life.

Jesus wants to use whatever you are prepared to offer him to make a difference in your life and in the lives of those you come into contact with.

You may not be able to invite unsaved friends to dinner, but what can you do to bridge the gap between them and Jesus?

As you listen to this beautiful song, identify with the words sung by Bill Gaither and the congregation, “I have decided to follow Jesus.”