In our session this week we look at two daughters – a biblical daughter and a modern-day saint. 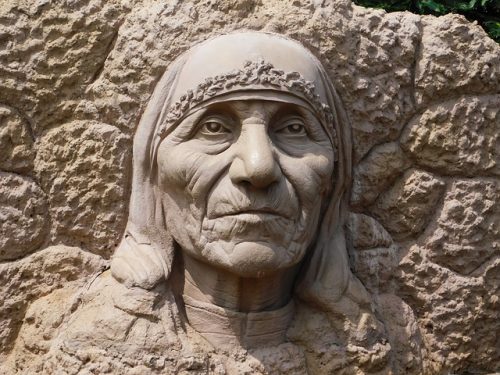 Mother Teresa is known worldwide for her good works, but who was she?

Anjezë Gonxhe Bojaxhiu (some sources have Agnes) the daughter of a well-off Albanian family, was born on 26th August 1910, in Macedonia. From the age of 12, she knew she would be involved in some form of calling.

She taught history and geography for 15 years at a high school for girls in Calcutta. However, she was concerned about the amount of poverty in that city. A trip to Darjeeling for a retreat convinced her of her true calling: “I heard the call to give up all and follow Christ into the slums to serve him among the poorest of the poor.”

She saw a need and sought to alleviate the suffering. In this way, she followed Jesus’ example.

Be kind and merciful. Let no one ever come to you without coming away better and happier. Mother Teresa Click To Tweet

There is one word that conveys Jesus’ attitude towards the needy folk that he encountered here on earth.

When he (Jesus) saw the crowds, he had compassion on them, because they were harassed and helpless, like sheep without a shepherd (Matthew 9:36 NIV).

When Jesus landed and saw a large crowd, he had compassion on them and healed their sick (Matthew 14:14).

Jesus called his disciples to him and said, “I have compassion for these people; they have already been with me three days and have nothing to eat. I do not want to send them away hungry, or they may collapse on the way” (Matthew 15:32).

Jesus had compassion on them and touched their eyes. Immediately they received their sight and followed him Matthew 20:34).

Jairus’ daughter was critically ill and on the verge of death, when Jairus appealed to Jesus to come and touch her, so she will get well and live. (Mark 5:23b CEV ) Despite being in a people log jam, out of compassion Jesus did not hesitate to make preparations to go along with this distressed father.

But before he was able to make much progress he encountered someone else with a desperate need. In the crowd was a woman who had been bleeding for twelve years. She had gone to many doctors, and they had not done anything except cause her a lot of pain. She had paid them all the money she had. But instead of getting better she only got worse. ( Ibid. Verses 25,26)

I’m sure that you can identify with this woman. We have all witnessed loved ones getting progressively worse and yet the doctors have been unable to get to the bottom of their health problems and their medical aid has run out.

In faith, this woman reached out believing that if she could just touch the hem of his garment she would be healed. Her faith was rewarded. At that moment Jesus felt power go out from him. He turned to the crowd and asked, “Who touched my clothes?” (Mark 5:30)

Jesus was not trying to put her on the mat, He wanted to set her free from any feelings of guilt over her secretive action and give her a word of comfort. “You are now well because of your faith. May God give you peace! You are healed, and you will no longer be in pain.” (Ibid. Verse 34) Jesus’ compassionate words were far better news than any doctor could have given her.

In the meantime,  Jairus’ daughter died. However, Jesus overheard those relaying the news to her father and encouraged him “Don’t worry. Just have faith!“ (Ibid. Verse 36b)

When He arrived at Jairus’ home Jesus raised his daughter to life again.

What is your area of need today? Why not take to the Lord in prayer believing in faith that our compassionate Lord will meet your need?

In 1950 Mother Teresa launched the Mission of Charity—an organization dedicated to meeting the needs of the homeless, hungry, handicapped, blind, and lepers. She opened a hospice for the poor, as well as a home for lepers, and orphans. Her major concern was for those people who had become a burden to society and therefore often shunned.

Because we love Jesus we ought to follow His example as Mother Teresa did,  being aware of people’s needs and doing what we believe He would have us do to alleviate those needs.

In closing give the following question prayerful thought and ask the Lord to show you how you can help.

During His life here on earth Jesus demonstrated to us the extent of God’s amazing love. In closing focus on the words of this beautiful hymn about the love of God. And as you listen to the words, think of each phrase and what it means to you personally. Then end with a time of giving Him thanks for all this hymn has reminded you of.