When nature is out of control the consequences can be disastrous

You may have experienced or perhaps viewed on TV, elements out of control – the desolation caused by earthquakes, flooding, landslides, tsunamis, forest fires, to name a few.

I recently watched a series of five natural disasters on Youtube which included one of tall trees falling suddenly across a highway due to heavy rainfall which had loosened the ground. Another showed a landslide down a mountainside and into a village for the same reason.

As I prepared this blog, here in South Africa, the residents of Carltonville were recently terrified because deep sinkholes suddenly appeared in their town as a result of the underground gold mining activity that had taken place in the area in the past.

The prophet Habakkuk hints at terrifying natural disasters in this week’s study.

‘The mountains saw you and shook. Floods of water swept by. The sea roared. It lifted its waves high.’ 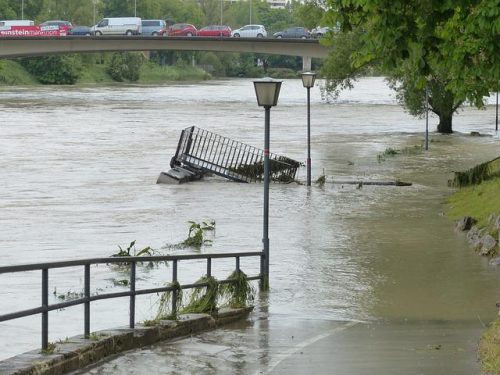 Image by Hans Braxmeier from Pixabay

The prophet’s emphasis in this week’s verse is on the effect of God’s devastating power revealed in the elements.

“When he stops, the earth shakes; at his glance the nations tremble. The eternal mountains are shattered; the everlasting hills sink down, the hills where he walked in ancient times.” (Habakkuk 3:6  GNB)

We know that Mount Sinai quaked in the presence of God.

“And mount Sinai was altogether on a smoke, because the LORD descended upon it in fire: and the smoke thereof ascended as the smoke of a furnace, and the whole mount quaked greatly.“ (Exodus 19:18 NIrV) (Bold mine)

The prophet is using poetical language in the next sentence. Floods of water swept by and The sea roared. It lifted its waves high.

This is a possible reference to the river Jordan in flood at the time that the Israelites passed through it. When the waters above stood and rose up as a heap, the waters below were cut off and passed away into the Salt Sea.

“When the priests got to the Jordan and their feet touched the water at the edge (the Jordan overflows its banks throughout the harvest), the flow of water stopped. It piled up in a heap–a long way off–at Adam, which is near Zarethan. The river went dry all the way down to the Arabah Sea” [the Salt Sea]. “And the people crossed, facing Jericho.”  (Joshua 3:15,16 MSG).

Another possibility is it refers to the time the deep waters of the Red Sea separated to enable the Israelites to pass through. The waters then rose up, made a great noise, and stood in a heap. God led his people through, and they did not even get their feet wet!

What the prophet appears to be saying, is that at the command of God, the waters overflow. His voice is like thunder coming up from the deep. This probably refers to the roaring that accompanies the sea.

Where we live in Summerstrand, a suburb of Gqebetha (formerly Port Elizabeth), we are only a seven-minute walk away from the sea. Most nights, when there is no traffic around, we can hear the roar of the sea.

Despite those occasions when the elements appear to be out of control, they are never out of God’s control. In fact, there are times when God uses the elements to carry out His judgement upon sin.

In the book of Numbers, we read of Korah’s rebellion. Korah along with Dathan, Abiram and On and a further 250 community leaders, rebelled against the leadership of Moses and Aaron. Their contention was,

“The whole community is holy. Every one in it is holy. And the LORD is with them. So why do you put yourselves above the LORD’s people?” (Numbers 16:3 NIrV)

After a time in prayer, Moses responded

The next day Moses and Aaron were instructed to move away from their opponents.

I have highlighted the main gist of the story but you can read about how God dealt with those rebels by using an earthquake in Numbers 16.

In Psalm 136 the psalmist records God’s involvement in the creation and in the history of His people the Israelites.

'When the grandeur of nature overawes you, when its terrific phenomena, thunders, earthquakes, volcanoes seem to overwhelm you, still praise Him. There is goodness in all.' (Psa 136:1-9 The Biblical Illustrator) Click To Tweet

The psalmist goes on to remind us of our loving God

No matter what life throws in our path … despite worldwide pandemics … regardless of the natural disasters which may come our way,  we who have received God’s gift of salvation through Jesus Christ have this assurance. The chief characteristic of God is love (1 John 4:8,16) and, as the psalmist says, God’s love never fails.

As we close this session spend time reflecting upon the Lord’s steadfast love. Click on this link and sing along with these words. Then thank Him for His unfailing love for you.

Have a great week!