‘God comes from Teman, and the Holy One from Mount Paran. Selah.
You bare Your bow, naked according to the oaths of the tribes of Your Word. Selah.
You struck the head from the house of the wicked to bare the foundation to the neck. Selah.’ 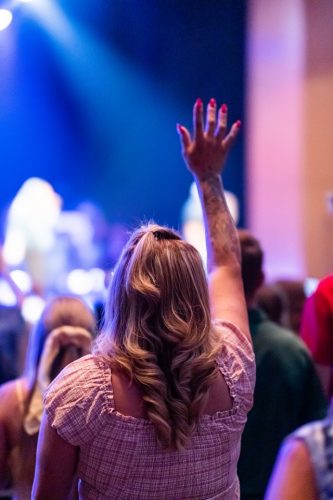 Note that all three of the above verses contain the word ‘Selah’. Different commentaries have varied interpretations of the meaning of this word.

The New Bible Dictionary states that in addition to these three verses in Habakkuk 3, the word Selah appears 71 times in the Psalms. It is believed to be a musical or liturgical term.

This Dictionary goes on to list three possible suggestions:
A) It is a musical direction to singers and or orchestra to ‘lift up’ – to sing or play loudly.
B) It is a liturgical mark ‘to lift up’, perhaps to lift up the voice or hands in prayer.
C) It points out that Hebrew versions of the Old Testament imply it is a cry of worship like ‘Amen’ and ‘Hallelujah”

In the context of the above-quoted verses, the third suggestion makes more sense. However, let us look at these definitions a little closer.

All three suggestions create the picture of individual involvement in worship.

These suggestions all reveal that the worship of God’s people in Old Testament times was one of active participation. Also, it was certainly loud.

A) Selah –  As a Musical Direction to Singers

One of the commentators for The Biblical Illustrator states, “I think there are more commands in the Bible to sing than there are to pray” (T De Witt Talmage).

He goes on to record the effect of military bands, “You know something of what secular music has achieved. One inspiring national air is worth thirty thousand men as a standing army. In the earlier part of the late war (2nd World War), the Government proposed to economise in bands of music, and many of them were sent home; but the generals in the army sent word to Washington: “You are making a great mistake. We are falling back and falling back. We have not enough music.” Then the Government changed its mind: more bands of music were sent to the field, and the day of shameful defeat terminated.” (T De Witt Talmage – The Biblical Illustrator)

When the Temple was finally completed during Solomon’s reign and the ark of the covenant was placed in the Holy of Holies, we read:

“The trumpeters and musicians joined in unison to give praise and thanks to the LORD. Accompanied by trumpets, cymbals and other instruments, the singers raised their voices in praise to the LORD and sang: “He is good; his love endures forever.” Then the temple of the LORD was filled with the cloud. “( 2 Chronicles 5:13 NIV)

They certainly made a joyful noise to the Lord as they lifted up their voices in praise.

B) Selah – As an Instruction to Lift Up

The second suggestion is to lift up perhaps the voice or hands in worship. We regularly raise our voices in worship but what about our hands?

In the Psalms David declares,

“May my prayer be set before you like incense; may the lifting up of my hands be like the evening sacrifice.” (Psalm 141:2 NIV)

Psalm 134:2 is an instruction by the congregation to the priests and Levites serving in the Temple.

“Lift up your hands in the sanctuary and praise the LORD.”

C) Selah – As a Cry of Worship

I find it exciting to be in a gathering of believers such as the ‘Songs of Praise’ gatherings, where the praise is led by a large augmented choir and accompanied by a full orchestra. That for me is a joyful noise to the Lord.

We don’t use the word, Selah in our praise and worship today, do we? Perhaps we should. But according to that third suggestion, the words Alleluia and Amen can also be used as cries of worship. Alleluia, literally means the Lord be praised! Or Praise the Lord! When we say Amen, we are agreeing – So be it!

In the well-known Bible commentary compiled by Jamieson, Fausset, and Brown, they say Selah is “a musical sign, put at the close of sections and strophes, always at the end of a verse… It implies a change of modulation and comes from a root to ‘rest’ or ‘pause’ …. implying a cessation of the chant, during an instrumental interlude.”

Along the same lines, I like the suggestion put forward by several commentaries that “Selah“, simply means ‘pause and think about what you just heard’.

If you are anything like me you don’t retain much of what you hear or read.  When I am reading a book and have to put it down when I come back to it I often have to go back a few pages to get back into the story.  When I am in church, I don’t remember much of the message hours later unless I have jotted down a few notes.

Remember how God encouraged the prophet to write things down?

“I will give you my message in the form of a vision. Write it clearly enough to be read at a glance.” (Habakkuk 2:2 CEV)

“Everything in the Scriptures is God’s Word. All of it is useful for teaching and helping people and for correcting them and showing them how to live.” (2 Timothy 3:16 CEV)

It is not only important for us to read the Bible regularly (daily). But we need to put into practice the precepts outlined there for our training in living a Christ-centered life.

Throughout the week endeavour to lift up Jesus.

Take time to pause and think about what He means to you.

Give careful thought to what you believe He has been saying to you personally through this week’s study.

Join me now as we lift our hands and voices in worship to our Lord, using an old favourite.

If you haven’t yet read the background to the prophecy, please do. It will benefit you throughout our time together.