I am sure that we all enjoy that sense of victory that we experience from time to time.

‘Were you angry with the rivers, LORD? Was your wrath against the streams? Did you rage against the sea when you rode your horses and your chariots to victory?’ 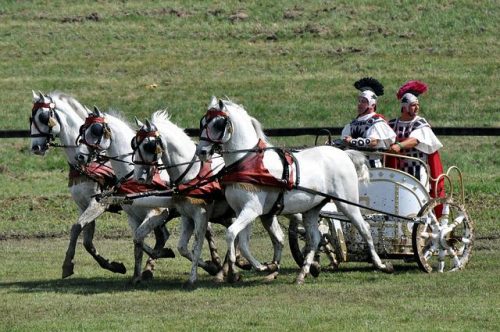 Image by Zsolt Nagy from Pixabay

Over and over again the God of Israel has proved Himself to be victorious over individuals, nations, and situations.

In our last session, we focussed on man’s inevitable fearfulness. We saw that as opposed to a natural inborn human fear there is an encouragement to grow Godly fear. We also saw that, in place of fear, the Lord offers us His peace which far surpasses any level of peace the world may be able to generate.

When our fear is overcome by God’s peace we begin to enjoy that sense of victory.

Asking a series of rhetorical questions, the prophet confirms that God was not angry with the rivers – Not the Rivers Nile or Jordan, nor with the Red Sea.

Habakkuk is reflecting on God’s involvement in rescuing Israel from Egyptian slavery.

First, His wonderful work in the passing through the Red sea, where Habakkuk envisages the Lord at the head of the Israelites in His chariot of war,  to rescue them from their cruel oppressors, the Egyptians.

The next is His intervention in stopping up the flow of the flooded Jordan River so that the Israelites could pass through into Canaan. This was in contrast to the chariots of Pharaoh which pursued the Israelites, then subsequently sank in the Red Sea. Like a mighty warrior riding in His chariot, God used His power to save His people.

“He makes the clouds his chariot and rides on the wings of the wind.” (Psalm 104:3b)

The horses and chariots which the Lord is pictured as riding upon are the elements — the clouds and the winds.

ELEMENTS OUT OF CONTROL

“As they sailed, he [Jesus] fell asleep. A squall came down on the lake, so that the boat was being swamped, and they were in great danger. The disciples went and woke him, saying, “Master, Master, we’re going to drown!” He got up and rebuked the wind and the raging waters; the storm subsided, and all was calm.”( Luke 8:23,24)

Here we see the Lord God having control over the elements on the Sea of Galilee.

Yet there are times when He seems to allow the elements to get out of control, are there not?

As I prepare this blog there have been severe thunderstorms in the Gauteng area of South Africa. In the meantime, along the Garden Route of the Southern Cape, many miles away,  several towns experienced flash floods of devastating proportions.

By contrast in our area of the Eastern Cape, the dam levels are so low that at times we are without any water in our taps (faucets).

When this happens we are inclined to ask ‘Why Lord?’

For example here are some of the reasons given for not attending church:

Think on these words of Jesus:

“But more than anything else, put God’s work first and do what he wants. Then the other things will be yours as well.”(Matthew 6:33 CEV)

Pharoah’s pursuing army, along with the elements—the Red Sea, the dry and dusty desert of Sinai, and the flooded Jordan River—as well as opposing nations en route, all threatened the progress of the children of Israel from Egypt to Canaan.

God’s wrath was not directed at the elements—the rivers or seas,  but at those who opposed His people.

Our adversary uses whatever means are available, including the elements, to thwart our efforts to live a God-glorifying life. God still opposes those who seek to destroy His people. However, He may allow the devil a certain degree of leeway in order to teach us a valuable lesson.

Jesus never promised His followers an easy life. In fact, He warned that they would face persecution. However, He does assure us of victory.

David who certainly had more than his share of persecution wrote, Now this I know: The LORD gives victory to his anointed. He answers him from his heavenly sanctuary with the victorious power of his right hand. (Psalm 20:6)

In a Psalm by the Sons of Korah we read, “…but you give us victory over our enemies, you put our adversaries to shame.” (Psalm 44:7)

The Apostle Paul wrote, “But thanks be to God! He gives us the victory through our Lord Jesus Christ.” (1 Corinthians 15:57)

And the Apostle John adds, “…for everyone born of God overcomes the world. This is the victory that has overcome the world, even our faith.” (1 John 5:4)

In the book of Revelation in His message to the seven churches God gave this assurance, “Whoever has ears, let them hear what the Spirit says to the churches. To the one who is victorious, I will give the right to eat from the tree of life, which is in the paradise of God.” (Revelation 2:7)

In what area of your life are you experiencing a victory? How about spending some time praising God for His goodness! Think of a song expressing your joy, and sing it through now.