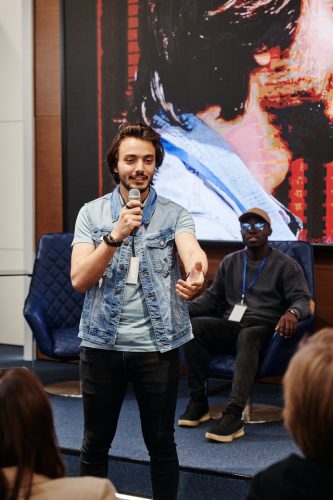 Being the host of a special event carries great responsibility.

Jesus received a dinner invitation from a rather discourteous host— a Pharisee named Simon. Note: This is a different host, woman, and message from the one we looked at last session. In Bible times VIP homes took the form of a hollow square built around an open courtyard. When a Rabbi was invited to a meal, townsfolk could enter the courtyard to listen in on the pearls of wisdom but not partake of the meal.

Yet, none of these was observed.

In the Middle East, the guests did not sit, but reclined,  on couches, at a low table resting on one elbow with their feet stretched out behind them; during the meal the sandals were removed. Simon was a Pharisee, most Pharisees hated Jesus—Why then had he invited Jesus to his home?

Into this setting came a gatecrasher—a prostitute who had quite a reputation in the town. She had probably heard about Jesus. So she joined the crowds that had gathered at Simon’s home. As an unwelcome looker on she stood on the outskirts of the crowd. However,  prompted by an inner voice she ventured into the courtyard. Like all Jewish women, she wore a vial of expensive concentrated perfume around her neck. She generally used it to seduce men.  As she drew closer to Jesus she had an irrepressible desire to pour this costly perfume on Jesus’s feet. But, her emotions got the best of her – the tears began to flow, dropping in large drops onto his feet.  Now his feet were all wet!  So she knelt at his feet close enough to use her hair to dry his feet.

For a Jewish woman to appear in public with her hair unbound was an act of immodesty. On her wedding day, a girl bound up her hair and would never appear in public with it unbound. The fact that this woman loosed her long hair in public showed that she was not concerned about what “the people thought”. Then she kissed his feet. Finally, she humbly poured out the contents of her vial upon His feet, not on His head as a token of submission.

It’s not difficult to imagine the reaction of those present – “Can you believe it, this woman is trying to seduce Jesus, in public.  Has she no pride?”  Our human tendency is, to sum up, and judge people by outward appearances, without trying to understand the motivation behind their actions.

– Frog march her out the door? – Phone the police?

Simon was scandalized – that she, of all people, was present and made such a public display of herself. He wasn’t concerned about her motivation—he felt no compassion towards her – he did not see a woman desperately in the need of forgiveness. The very fact that Jesus even allowed this outcast of society to touch him proved to Simon that Jesus was no prophet – a true prophet of God would have recognized this woman for what she was.

Jesus intervened, “Simon, I have something to tell you.”  “Tell me teacher,.,” Simon didn’t anticipate what followed.  Jesus told him a short story about two debtors who owed a moneylender different amounts of money. Neither could repay the debt. The moneylender out of a generous heart decided to cancel both debts, “…which of them will love him more?  Jesus asked. “I suppose the one who had the bigger debt cancelled”, was Simon’s response.

What Simon had lacked in common courtesy this “sinner” had humbly demonstrated through her actions: –

A Pharisaic attitude like that of Simon shuts us off from God – I’m a good person. Lord, – I do not steal, I do not kill, I do not tell lies, I do not commit adultery, and I do not covert. Lord, I live a good clean life.”

Francis of Assisi once said, “There is nowhere a more wretched and more miserable sinner than I.”

Jesus then spoke the most wonderful words, a sinner could ever hear, “Your sins are forgiven.” Her flowing tears and many kisses showed a real desire to be forgiven – to be different. Her long hair and perfume once used to lure her lovers were used to demonstrate her complete surrender of herself to the Saviour. She was not concerned about what the people thought or even this Pharisee; her one desire was to see the warm,  look of tender compassion in Jesus’s eyes and to hear His wonderful words of forgiveness. “Your sins are forgiven. Your faith has saved you, go in peace.”

A hardened criminal in a Japanese prison once picked up a copy of the Bible and began to read the story of the trial of Jesus. He remained unmoved by what he read, until he came to our Lord’s words, “Father, forgive them; for they do not know what they do.”  He was stabbed to the heart by those words. Later he said, “Through this simple sentence of gracious pardon, I was led into the truth of Christianity.”

Simon only saw an outcast of society who was causing him a great deal of embarrassment. Jesus saw a woman with a deep need – a woman who had led despicable life – but a woman who wanted to be different – a woman in need of salvation. Never judge a man's actions until you know his motives. Click To Tweet The Sioux Indians of the U S A have a prayer, “Great Spirit, help me never to judge another until I have walked in his moccasins for two weeks.”

Jesus’ reaction to this woman teaches us not to take things at face value. This next week before passing judgment – Try to understand what motivates a person to do what they do. – Be prepared to make allowances for the fact that you don’t know where others are coming from.  – Look for opportunities to meet the needs of others when they become apparent to you.  – Be constantly open to being used as a channel through which God can bless others.

How we handle the out-of-the-ordinary situations that we encounter in life often reveals just how deeply we are committed to Christ. That outcast of society heard the most wonderful words in all the world. Why not sing along with the choir as they sing about the Wonderful words of life?