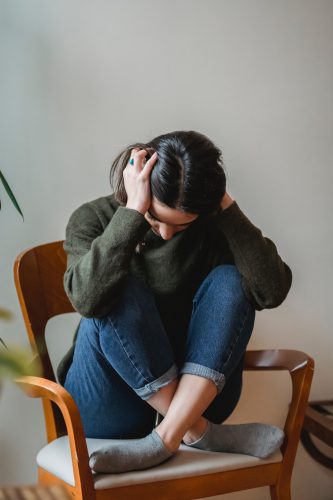 It may not have been something wrong and sinful, something quite innocent. Perhaps you were trying to do something good for someone without them being aware. Like wrapping a gift, writing a greeting card, or arranging a surprise party.

One day, the religious leaders tried to catch Jesus out in the presence of His supporters.

“Teacher,” they said to Jesus, “this woman was caught in the very act of committing adultery.” (John 8:4 GNB )

The case was open and shut. Under Jewish law adultery was a very serious crime—one of the worst offenses that one could commit, with the penalty being death.

The religious leader said, “In the Law, Moses commanded us to stone such a woman,” This seems to indicate that the woman was engaged.

“This woman brought evil into your community by sleeping with someone before she got married, and you must get rid of that evil by killing her. (Deuteronomy 22:21b CEV)

The modern-day tendency is to sanction extra-marital affairs. Yet adultery has always been, and will continue to be, a serious offense in God’s eyes. “You shall not commit adultery”. (Exodus 20:14)

IN THE HOT SEAT

Why, when the case was so clear, did these religious leaders, who had obviously already passed judgement, single out this woman for Jesus’ judgment?

We see the answer in verse 6. “They were using this question as a trap, in order to have a basis for accusing Him.”

If Jesus advised them to apply the sentence laid down in the Law of Moses, He would find Himself in two kinds of trouble:

On the other hand, He would have given the impression that He didn’t the God-given Law seriously. The religious leaders would have been quick to point out that God condemns adultery.

Now what do you say? Jesus seemed to turn a deaf ear to their question.

Matthew Henry, the Bible commentator says, “Think twice before you speak once.“

Jesus’ appeared to hesitate, so the religious leaders pressed for a response. “They kept on questioning Him.”

Jesus’ response was challenging: “If any one of you is without sin, let him be the first to throw a stone at her.”

Jesus underlined a principle He taught in the Sermon on the Mount—“Do not judge, or you too will be judged.  For in the same way you judge others, you will be judged, and with the measure you use, it will be measured to you.” (Matthew 7:1,2)

Often in Christian circles we expect standards of others which we fail to keep ourselves.

According to Jesus’, not one of us should cast judgement on others—to do so is in itself a sin and puts us on the same level as the one we are judging—in need of Jesus’ forgiveness. Concentrate on improving yourself, and you will have little time to criticize or judge others.

We can give the religious leaders credit for their honesty—they took Jesus’ words to heart—realizing that none of them was free from sin, they withdrew,“…the older ones first”

“…Jesus was left, with the woman standing there.”

The religious leaders had gone, the crowds were still there, and the woman was still guilty of her sin. And God’s just law still required a penalty for her sin.

Jesus pronounced a sentence, often passed in our courts today—a suspended sentence. He gave her a second chance.

The Saviour is speaking to you and me today, “I know all about your sins. If you want to make a fresh new start, today can become the first day of a completely new way of living.”

Jesus said, “Go now and leave your life of sin. —a challenge to this woman to turn her back on her sinful past and to start living her life based on God’s standards.

No matter how low you may have stooped in your life—no matter how deeply ashamed you are of the things that you have done—no matter how difficult you may find it to forgive yourself—your life can be transformed by a forgiving Saviour.

This story is unfinished—the Bible does not tell us what her choice was.

In the same way, your life is an unfinished story. This passage confronts us again, today, with the fact that we are all sinners. Our lives are under the same suspended sentence.

Join some of my favourite singing group as they sing, “A Sinner Saved By Grace.”