Water is life. One may be able to fast for long periods but one must drink or die of dehydration.

Can you recall when you desperately needed water to quench your thirst? 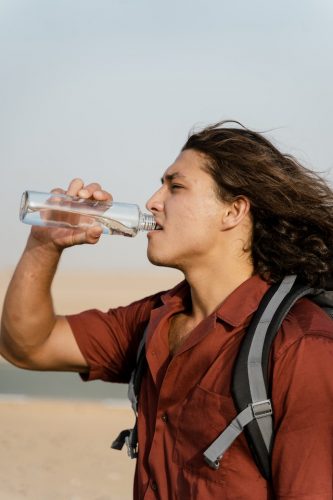 The story of the nameless woman at Jacob’s well, who lived in the little village of Sychar in Samaria, is only found in John’s gospel.

In Jesus’ day, Palestine comprised Galilee in the North and Judea in the South. Between the two was the territory of Samaria. From Judea to Galilee,  normally took about 3 days if you walked. However, there was enmity between the Jews and the Samaritans so Jews normally skirted around Samaria taking approximately 6 days.

In 722 BC the King of Assyria captured the northern kingdom of Israel which included Samaria. He took some of the Israelites living there captive to Assyria & brought people from Babylon to live in Samaria. Intermarriage with the Israelites resulted in the orthodox Jews regarding them as an unclean hybrid race.

When the Israelites were released from captivity, the Samaritans offered to help them rebuild their cities and their temple. However, no way would they allow this despised mixed breed race to assist. Instead, the Jews encouraged them to build a temple for themselves on a mountain, Mt Gerizim.

In biblical times there were no large dams, their main water supply came from deep underground springs referred to as living water.

Jesus opted on this occasion to take the shorter route to Galilee. He and his disciples stopped at Jacob’s well on the outskirts of the village of Sychar. Jesus sat at the well but sent the disciples to buy food. At about noon a woman arrived.

Generally, the women came to draw water either in the early morning or evening. Having been married to five husbands, this woman was regarded as an adulterous, loose-living woman. But…

Whatever, she was currently living with a man with whom she was not married, so maybe things weren’t all that simple!

The real issue is that this woman felt rejected, thirsty, and lonely and she came across someone  who cared—Jesus.

Jesus effectively said to her, “If you knew who I am, you wouldn’t want to talk politics! I can give you Living water.”

She thought Jesus was talking about the fresh water at the very bottom of the well, but Jesus had the water of the Spirit in mind.

Note that Jesus didn’t condemn her wrong thinking. Instead, he gave her an instruction – ‘Go and fetch your husband.

According to Jews, true worship could only take place at the temple in Jerusalem. However, the Samaritans were not permitted to worship there. Mount Gerizim, was their sacred mountain.  “Rabbi, Tell me which is the correct place to worship God. Jerusalem or Mt Gerizim?”

The woman tried to give the impression that she was religious by speaking about the promised Messiah who would come. Jesus responded, “I who speaks to you am He!”

Woah! That must have rocked the woman back on her heels!

The disciples returned, and the woman couldn’t wait to tell others. She rushed off to the village, leaving her water jar behind. “Come and see this man who told me everything I ever did! … Could this be the Christ?”

This despised woman was transformed with a glow on her face. Folk who usually gossiped about her accepted her invitation to meet Jesus and, “Many believed in Him because of the woman’s testimony.” Yet all she did was run back to the village and share what Jesus had done for her.

When Jesus and the disciples departed two days later, the townsfolk told the woman, “We no longer believe just because of what you said: … now we know that this man is really the Saviour of the World.”

The Samaritan woman belonged to a despised race—She may have been a loose-living woman—she certainly was not popular. But she met the Saviour and she was completely transformed. Those who despised her came to accept her testimony.

Wherever you find yourself today, the same Jesus who offered that woman living water desires to fill you so that you need never thirst again.

The greatest need of the church, and the thing which, above all others, believers ought to seek for with one mind and with their whole heart, is to be filled with the Spirit of God. Andrew Murray Click To Tweet

No matter how great our experiences with Jesus have been, if we don’t stop to top up, we will eventually run dry.

The late Dwight L Moody was once asked why he urged Christians to be filled constantly with the Holy Spirit. “Well,” he said, “I need a continual infilling because I leak!”

We are going to end this session with the words of a song Fill my cup Lord, which you may know. Please make it the prayer of your heart.