We often encounter situations which cause us to become anxious and fearful.

How do we cope in such situations?

I am sure you can identify with the prophet’s emotions expressed in our verse for this session.

‘I heard and my heart pounded, my lips quivered at the sound; decay crept into my bones, and my legs trembled. Yet I will wait patiently for the day of calamity to come on the nation invading us.’ 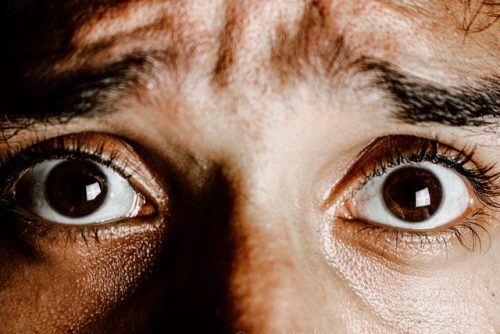 In contrast with the prophet’s description of his own fearfulness, the traveller above is a picture of calmness. Despite seemingly having to wait for the transport with nowhere to sit or a possible nearby food source he quietly works away on his laptop.

As noted earlier on in our study, verses 16 to19 were used as a part of the temple liturgy. They are in the form of a psalm expressing obedience and praise to God and trust in Him.

Habakkuk began his prophecy in a state of confusion: “How long, LORD, must I call for help, but you do not listen? Or cry out to you, ‘Violence!’ but you do not save?” ( Habakkuk 1:2)  He ends the prophecy with an affirmation of his faith and an expression of his unwavering confidence in God. “Yet I will wait patiently for the day of calamity to come on the nation invading us.”

As he reminds himself of the great things God had done in the past, he is greatly encouraged and filled with joy. He is determined to delight in the Lord, for he realizes that when all appears to be lost, in fact, nothing is lost at all, for God is still in control.

Although God’s response to his prayer satisfied Habakkuk, the very thought that the Babylonians (Chaldeans) would invade filled him with a pounding heart and quivering lips.

Yet he would ‘wait patiently for the day of calamity,’ because he knew that the Lord was a righteous judge. Nevertheless, he knew Judah would feel the wrath of God because of their failure to ‘observe to do all the words of this law’ (Deuteronomy 28:58).

Habakkuk clearly had a great reverential fear for God. In the presence of God, his bones seem to be rotten. His legs seemed so weak they could hardly support him.

The writer to the Hebrews warns us,

We have just come through another Easter season when we have reflected on Jesus’ last meal with His disciples as they celebrated the Passover together. We were reminded of his arrest and horrific suffering culminating in that excruciating death on a Roman cross. Then on Sunday, we rejoiced in the knowledge that ‘He has risen’.

The first indication that Jesus had risen from the grave did not instil feelings of peace within the disciples but rather a state of confusion. When Mary Magdalene informed Peter and John that someone had removed Jesus’ body from the tomb, the men found it hard to believe and went to check it out themselves.

The other women who also visited the tomb were told by two angels:

“‘He is not here, but raised up. Remember how he told you when you were still back in Galilee that he had to be handed over to sinners, be killed on a cross, and in three days rise up?’

“Then they remembered Jesus’ words.  They left the tomb and broke the news of all this to the Eleven and the rest.” (Luke 24:6-9 MSG)

Sadly when they shared the good news with Jesus’ followers, we read, “…but the apostles didn’t believe a word of it, thought they were making it all up.” (Luke 24:11)

Luke also tells us about two followers who, perhaps not surprisingly, had decided to leave the city with its confusing stories.  On their way to the village of Emmaus, they were mulling over these disturbing stories when Jesus joined them.  He was aware of their tension and they shared with him the things that they had heard in Jerusalem.

In their confused state of mind, they failed to recognize him but invited him to join them for the night. When he blessed and broke the bread then only did they recognize Him—and He disappeared. (Luke 24:13-31)

They decided to return to Jerusalem to share their amazing news, only to find the others still battling to come to grips with the situation. Seemingly Jesus had also made an appearance to Peter while he was alone. (Luke 24:34)

CALM TO THE FEARFUL

Into this cauldron of confusion, Jesus entered, “Jesus appeared to them and said, “Peace be with you.” (Luke 24:36)

Jesus set about bringing calm to his followers who were filled with fear because of the unexpected turn of events. Initially, we read, “They thought they were seeing a ghost and were scared half to death.”  (Luke 24:37)

He continued with them, “Don’t be upset, and don’t let all these doubting questions take over. Look at my hands; look at my feet–it’s really me. Touch me. Look me over from head to toe. A ghost doesn’t have muscle and bone like this.”  As he said this, he showed them his hands and feet.  They still couldn’t believe what they were seeing. It was too much; it seemed too good to be true.

He asked, “Do you have any food here?” They gave him a piece of leftover fish they had cooked. He took it and ate it right before their eyes. Then he said, “Everything I told you while I was with you comes to this: All the things written about me in the Law of Moses, in the Prophets, and in the Psalms have to be fulfilled.”

He went on to open their understanding of the Word of God, showing them how to read their Bibles this way. He said, “You can see now how it is written that the Messiah suffers, rises from the dead on the third day, and then a total life-change through the forgiveness of sins is proclaimed in his name to all nations–starting from here, from Jerusalem!  You’re the first to hear and see it. You’re the witnesses.” (Luke 24:37-48 MSG)

This same Jesus who went to great lengths to alleviate the fears of those early disciples desires to set aside any fear we may be entertaining today. He said,

“Peace I leave with you; my peace I give you. I do not give to you as the world gives. Do not let your hearts be troubled and do not be afraid.” (John 14:227)

When we are caught up in difficult and fearful circumstances, it is difficult for us to keep trusting that the Lord is still in control but the hymn writer W. B. Stevens reminds us that

In closing join me in listening to Elvis Presley singing this hymn and identify with the words.

As part of the Welcome to My World challenge, I am first answering this week’s question:

What does the word WATER make you think of?

The water crisis in our country at present.

Habakkuk was faced with a major crises facing his country. Read on.

‘The law can’t do what it’s supposed to do. Fairness never comes out on top. Sinful people surround those who do what is right. So people are never treated fairly.’

Johnny was struggling with his homework. One question, in particular, had him stumped. Eventually, he wrote in his homework book, “Boy am I konfused?”

The next day when the teacher was going around the classroom checking on their homework she came to Johnny’s desk and saw his answer. “Johnny, you don’t spell confused with a ‘k’!”

Quickly the reply came, “That’s just how confused I am.” END_OF_DOCUMENT_TOKEN_TO_BE_REPLACED